New research: Most employees support federal vaccine mandates but don’t believe they will be enforced

More than a year and a half into the pandemic, the country faces a pivotal moment as the federal government begins to roll out vaccine mandates for federal workers, healthcare workers and those at companies with more than 100 employees.

While businesses are grappling with labor and supply shortages, the majority of Americans hope new federal rules will bring relief from COVID spread and encourage safety-conscious Americans to reenter the workforce. On the other hand, others are concerned that vaccine mandates will cause unvaccinated workers to quit. These policy decisions can be divisive, according to 60% of U.S. employees who say vaccine mandates or discussion about them have caused contention in the workplace.

Seeking insights into employee sentiment toward vaccines and then acting on that data is critical for employers hoping to comply with mandates and retain employees. Qualtrics asked those who will be subject to the executive orders what they think of the new regulations and how vaccine mandates will affect their career decisions going forward.

Complying with vaccine mandates is the next in a long list of challenges employers have had to face during the global pandemic. The majority of American employees support vaccine mandates, whether from their employers or from the government.

Some employees will leave their jobs

In the midst of a labor shortage, companies are worried about losing workers. While the majority of unvaccinated Americans are not worried about getting fired if they don’t comply with requirements, 75% of unvaccinated workers say they are considering leaving their job when mandates go into effect (45% would strongly consider leaving). 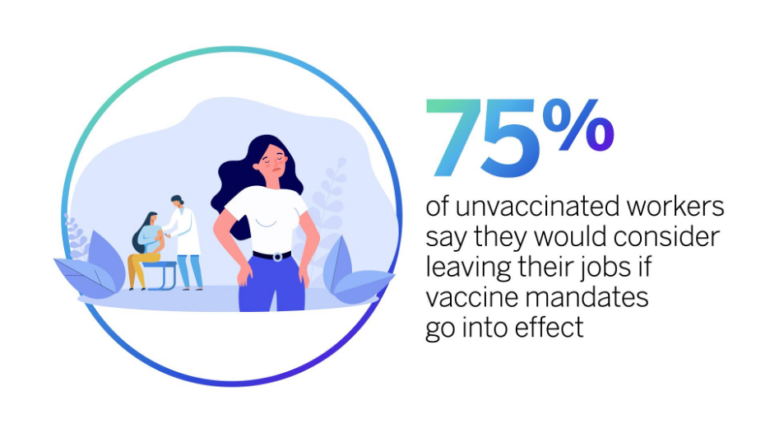 While the Biden administration has announced that non-compliant businesses will be fined, less than half (49%) of U.S. employees are confident the federal government will effectively enforce vaccine mandates for private businesses.

Most employees are willing to report coworkers

One thing that may assist in the enforcement of federal vaccine mandates but add to contention among coworkers is that most employees would consider reporting a coworker to company leadership, OSHA (Occupational Safety and Health Administration) or another authority for violating a vaccine mandate. 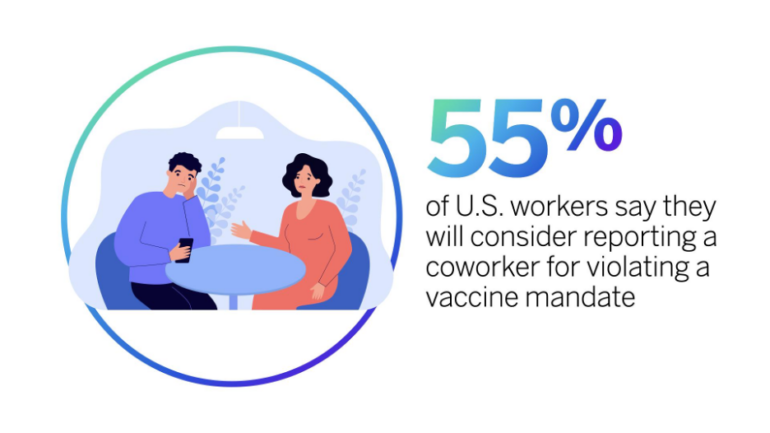 Contention in the workplace

64% of vaccinated and 49% of unvaccinated employees agree that vaccine requirements or discussion about them have caused contention at their place of work.

The unvaccinated will be hard to sway

Federal vaccine mandates are meant to influence and protect the unvaccinated, but few in this group say they are likely to be convinced by a law or executive order.

Employees in the Tech & IT industry are the most supportive of federal vaccine mandates compared to those who work in health care, retail, and government. Roughly a quarter of government, healthcare, and private employees oppose mandates that would apply to them.

This study was fielded between Oct. 12 and Oct. 15, 2021. Respondents were selected from a randomized panel and considered eligible if they live in the United States, are at least 18 years of age and are employed full-time or part-time. The total number of respondents was 1,309. Respondents who did not pass quality standards were removed.

How to understand every employee’s journey across all touchpoints

What’s keeping employees from going back to open offices

How to build and develop inclusive teams

How Community Health Network is providing the best caregiver experience

Technology challenges in the workplace