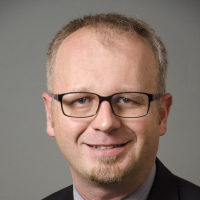 Disclaimer: I know there's almost nothing that can be done on the Qualtrics user side about the following issue, and that it is isolated and relatively trivial; I'm just curious to learn if other users have had similar reports from their respondents, and if so, how they addressed it.

I have a monthly survey panel with nearly 13,000 members. One member of the panel has contacted us several times to report that there is a "typo" in the survey link; specifically that a period in the domain part of the survey URL is missing. It should be "surveys.ada.org" but it comes through to him instead as "surveys.adaorg". He shared a screen shot to confirm the issue. Fortunately the message repeats the full URL below the button, and it is not impacted, so the respondent has been able to access the survey from that.

It's almost certainly the case that this is happening after the message leaves the Qualtrics server. Fortunately, the problem appears to extremely isolated, since more than half of those who open the invitation go on to start the survey, and no one else has reported this issue in the 11 months this study has been conducted.

I know that email clients will sometimes corrupt or deactivate hyperlinks by inserting a line break in the middle of a URL or by other means, but I've never seen an instance where a character is removed from a URL. Has anyone else seen evidence of an issue like this before? If so, do you know what caused it?