The Variable Settings menu allows you to manage details of the variables in your data set, including changing the variable name, recoding the variable values, and hiding variables from your workspace. Here are some examples of when you might need this functionality:

Example: You have a question where you ask if respondents are members of group 1, 2, or 3. Stats iQ thinks this is a numeric variable, and when analyzing it, finds values such as average, max, and min. But these groups are truly categories, and should be treated as if they were called Group A, B, or C, or red team, blue team, and green team. In this case, it helps to go to variable settings to change the variable type.
Example: You have respondents select from a series of income ranges. You notice in Stats iQ that these ranges aren’t listed from lowest to highest; you could use the variable settings to reorder these ranges.
Example: One of your questions has a “Not Applicable” option respondents can choose if the question doesn’t apply to them. If desired, you can exclude these values from analysis.

To access the variable settings, click the Settings icon in the upper-right corner of the workspace and select Variable Settings. 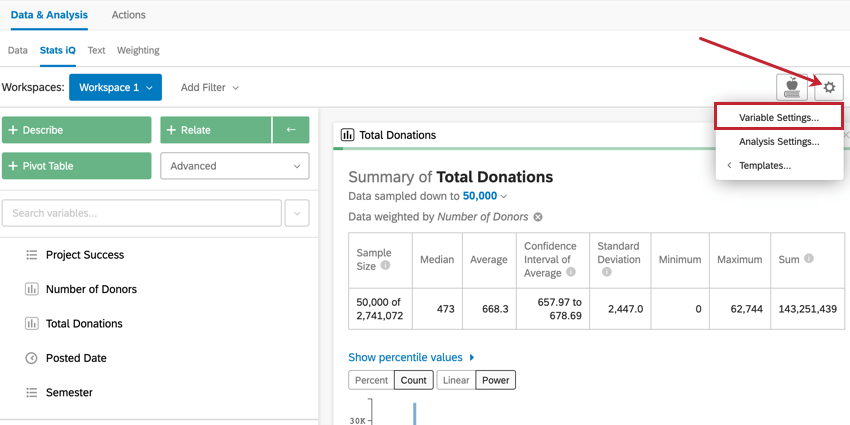 Qtip: If you would like to know more about analysis settings instead, visit the Analysis Settings page.

The Name column in the Variable Settings menu displays the current name of each variable in the data set. Click a variable name to edit it. Type the new name and press Enter on your keyboard to save the new name. This will change the variable’s name in Stats iQ but not in the rest of Qualtrics. 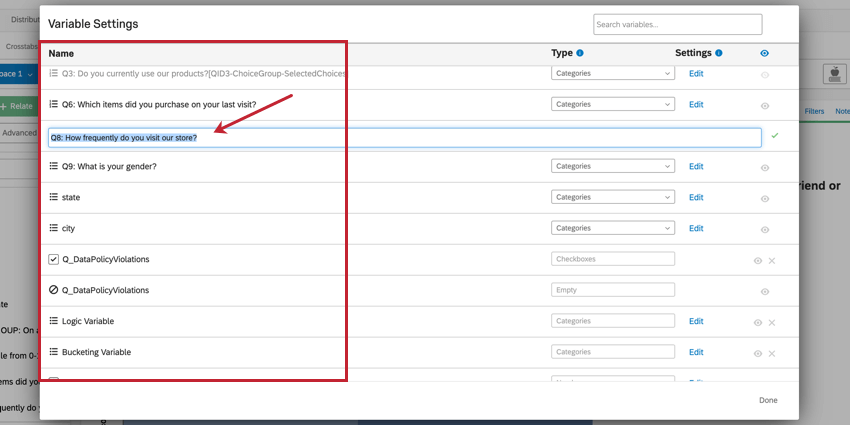 Qtip: You can speed up the process of renaming variables by clicking Tab to easily switch from one to the next.

Use the search bar at the top of the window to search for variables in your data set. 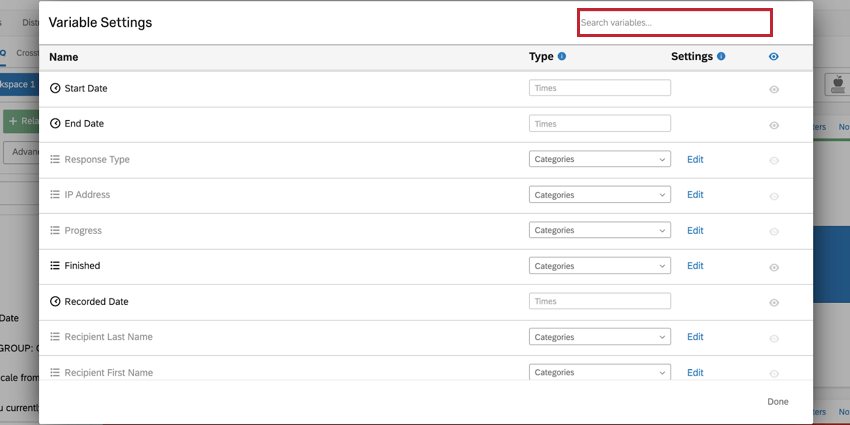 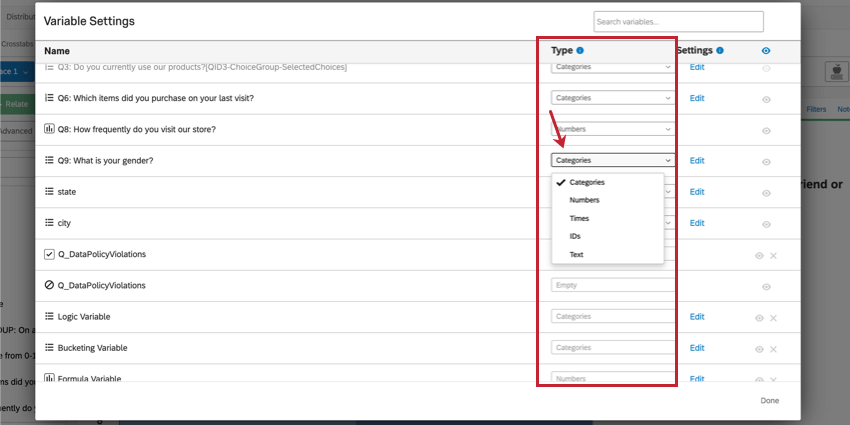 A list of variable types can be found on the Stats iQ Overview page.

Some variable types can’t be changed. See the below list on what changes are not allowed. 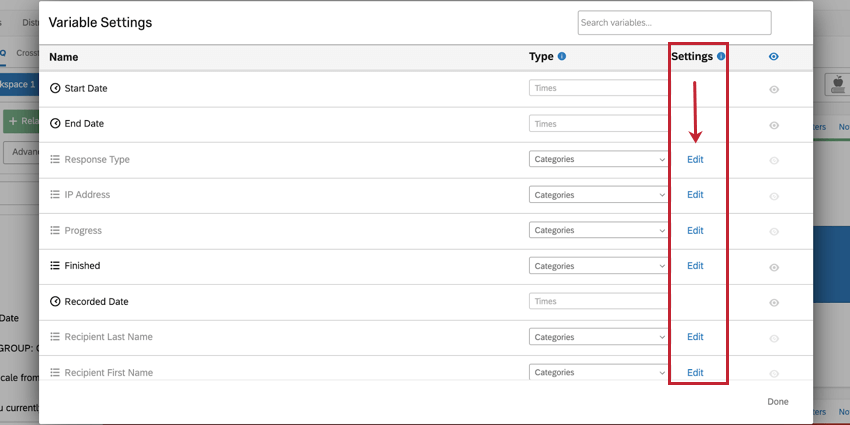 You can recode categories variables so that your categories have a number associated with them. You can then use these numbers in your statistical analyses. 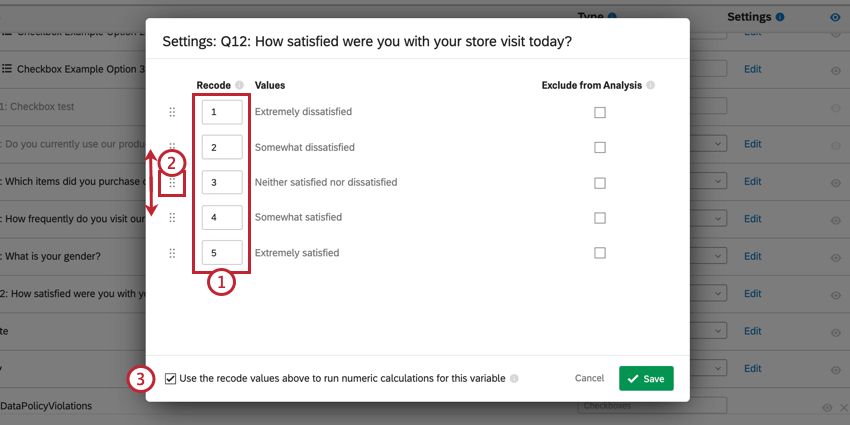 You can’t recode checkboxes variables directly. However, you can recode each value (i.e. answer choice) of your checkbox variable. 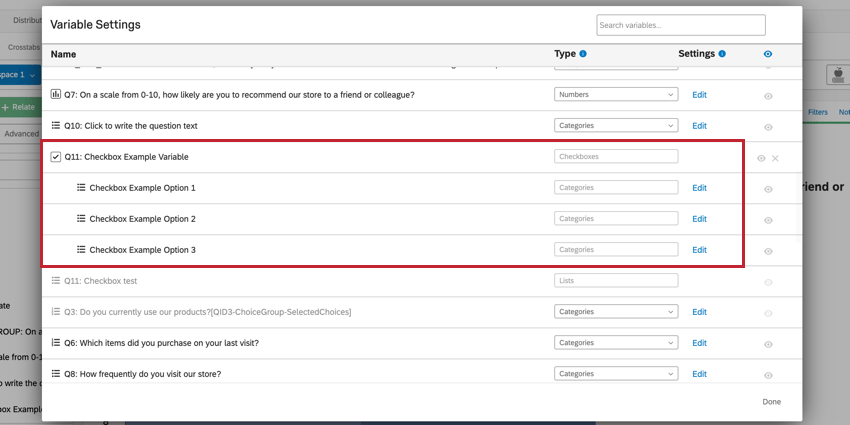 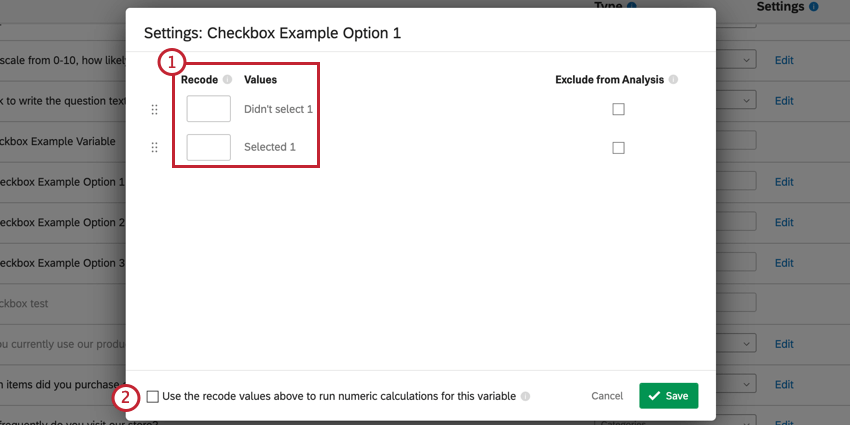 If you’ve created a custom variable, you can edit the rules of your variable by clicking Edit next to the variable.

When recoding your variables, there’s an option to mark a value as “Exclude from Analysis”. What this means is that the value will not be used in any calculations in Stats iQ. This option is usually used for values such as “not applicable” or “other”.

When you build your survey, you have the option to mark certain answer choices as excluded. If you do this before generating your Stats iQ dataset, those same fields will automatically be marked as excluded from analysis in Stats iQ.

Qtip: Marking a field as “Exclude from Analysis” in Stats iQ will affect the field in both Stats iQ and Crosstabs. However, the field will be unaffected in other areas of the platform, such as in your raw data and in your reports.

You can mark values as “Exclude from Analysis” for the following variable types:

The Variable Settings window allows you to hide variables from your workspace and remove them from your data set entirely. 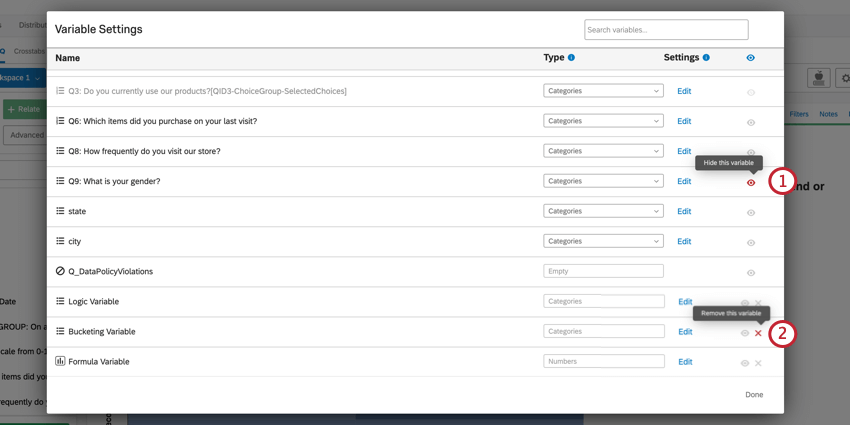 Top Box represents the percentage of respondents who fit into the highest ends of a question or variable’s scale. Creating a Top Box for your data can make your results stand out more intuitively. In other words, it’s generally more intuitive to think, “40% of people gave a really good answer!” than “the average was 3.8.” Stats iQ allows you to create a Bucketing setting directly on your variable card, which allows you to create a Top Box for your statistical analysis. This can be particularly helpful when interpreting your results, because it will break down your variable into a form that’s easily digestible and is commonly used in certain fields, like in Employee Experience research.

Attention: This feature allows you to create a Bucketing setting directly on the variable. If you would like to bucket a new variable, see Stats iQ Variable Creation.
Example: In some situations, like in Market Research, the only thing that matters is getting a Top Box measurement. It’s unlikely that someone responding with a 3 on a 1-to-5 satisfaction survey will buy a product, so it’s not meaningfully different from a 1 on that scale. In this case, Top Box allows you to collapse your data for easier analysis.

After Bucketing to apply Top Box to your variable, you can use Relate to analyze and compare the Top Box results between two variables.

Attention: Once something is bucketed, it will continue to behave as a categorical variable throughout any other analyses that are done in Stats iQ.

To create a new variable in Stats iQ, click Create or Clean Variable in the lower-left corner. Th...

Let’s say you internationally distribute a survey asking what country each respondent lives in....

It’s easier to ask your respondents for their height and weight than to ask them to guess their...

After creating a bucketed, formula, or combined variable, you may realize that you want to make c...

To get started with Stats iQ, you can either upload a dataset to Qualtrics, or you can open a pro...