Everything you wanted to know about gender neutral pronouns

12 min read
Knowing how to use gender neutral pronouns will help avoid any misgendering, and go a long way towards creating a warmer, more inclusive workplace where everyone feels safe and able to be themselves. Read on to learn how

Your gender identity is essential to your sense of self. And you can’t tell gender simply by appearances. People can identify as non-binary, transgender, cisgender, gender non-conforming, genderqueer, or as one or more of 50 gender options identified by ABC news. And if you misgender someone by referring to them with incorrect pronouns, you risk workplace backlash and causing offence and alienation to co-workers, customers, clients, and management.

Knowing how to use gender neutral pronouns will help avoid any misgendering, and go a long way towards creating a warmer, more inclusive workplace where everyone feels safe and able to be themselves.

“Using gender neutral language is a positive step towards creating a world where everyone is accepted without exception.” Says Laura Russell of Stonewall.

Related: How to apply DEI to your employee experience program eBook

What are gender-neutral pronouns?

We all know from school grammar lessons that traditional pronouns are words that refer either to the person speaking: I or you, and the person or thing being spoken about: he, she, it, them, this, that. Gender pronouns refer to the people you are speaking about: he, she, ze (we’ll come onto this in a second), they.

Never use ‘it’ or ‘he-she’ as someone’s pronouns when referring to gender nonconforming people.

Some examples of only gender neutral pronouns

The University of Wisconsin has produced a handy card with other gender neutral pronouns and a ‘how to’ guide for usage: 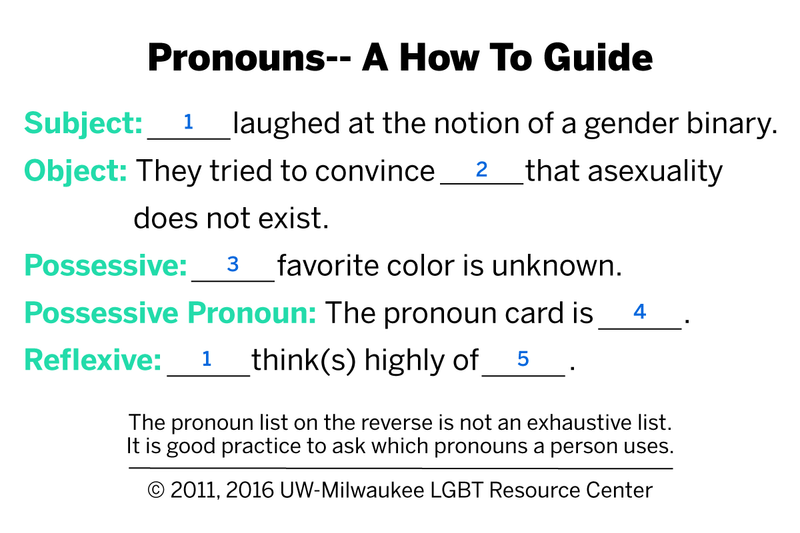 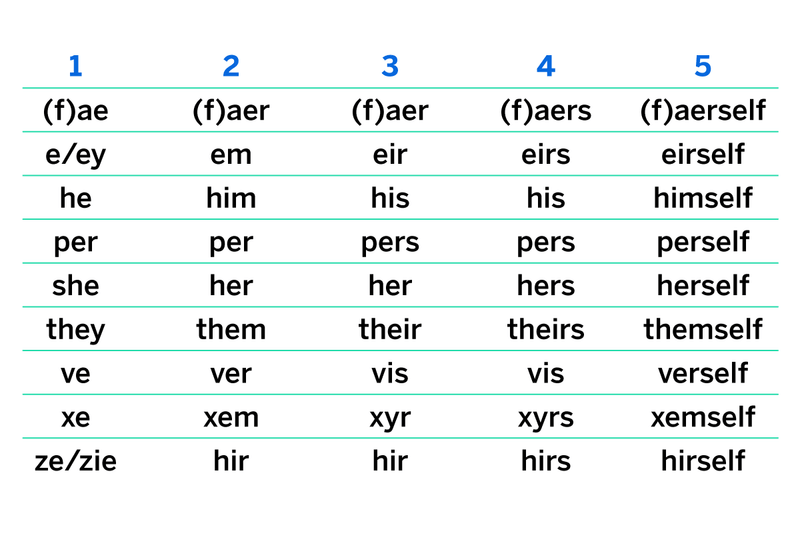 NB: the top line is meant to indicate two separate – but similarly spelled – sets of pronouns. They are ae/aer/aers and fae/faer/faers.

Why are gender neutral pronouns important?

A 2019 study found that using gender neutral pronouns reduced those psychological biases that have traditionally favoured cisgender men, and increased positive attitudes towards women and the LGBT+ community.

Laura Russell of Stonewall says, “The language we use is important, especially when it comes to describing or referencing someone’s identity. This study adds to the evidence showing that when we use language that actively includes women and LGBT+ people, it makes a real difference in reducing gender stereotyping.”

When your business places DEIB (diversity, equity, inclusion, and belonging) high on its agenda, as it should, gender neutral pronouns contribute to that culture of belonging. 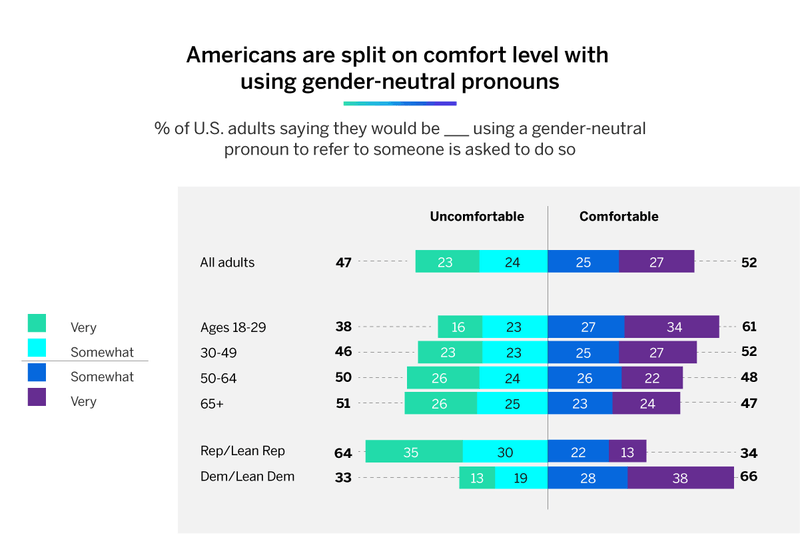 How to learn a person’s pronouns

The first thing to get out of the way, straight away, is don’t refer to pronouns as ‘preferred’ as in, ‘what are your preferred pronouns?’ A person doesn’t prefer to use these pronouns over any others, as if it’s some sort of choice – their pronouns are simply what should be used.

The second thing not to do when you first meet someone is ask directly about their pronouns. This can feel as if you’re trying to ‘out’ them as non-binary, transgender, or gender nonconformist, and can cause discomfort, particularly if you are meeting them in an environment where they haven’t chosen to share their gender identity. Non-binary or transgender people may choose to be ‘out’ in certain spaces and not others, so not directly asking for pronouns gives them the choice to offer them or not

And thirdly, people’s pronouns may change, so don’t assume ‘they’ will always be ‘they’. People have the freedom to identify as ze, she, per, ey – as they choose.

The best way to learn a person’s pronouns is by offering yours first. So, you may say, “Hi! I’m Ruth and my pronouns are she/her”. By sharing your pronouns initially, you: 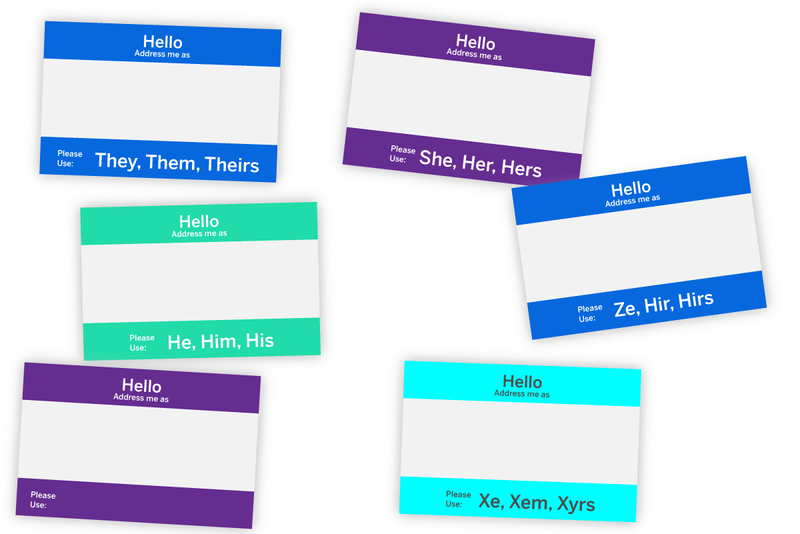 What should I do when somebody uses pronouns I don’t know?

The concept of gender is constantly changing, ebbing and flowing. Within non-binary, transgender, and gender nonconforming communities, there is freedom to create one’s own pronouns, or adopt pronouns that are little used.

You can get ahead of this issue by ‘doing the work’, i.e. educating yourself on gender neutral pronouns so you are familiar with the sounds of most of them, also appreciating that you won’t know them all.

The second skill to use here is listening. When you have offered your pronouns, and a person chooses to offer theirs back, listen very carefully. You will probably recognise the person’s pronouns, but if you don’t, respectfully ask for clarification. A polite question such as “Excuse me, but were those ze/hir pronouns you used just then?” opens the way for the person to either agree with you that they were, or correct you if they used something else. Once you’ve gauged the person’s willingness to talk about their pronouns, you could take it a stage further and ask, “How would you like these to be used?”

But do read the room. Asking for clarification draws attention to the gender neutral pronoun use which the person may not be comfortable with, particularly among large groups, so asking the person in a more private setting may be more appropriate.

What should I do if I make a mistake?

It goes without saying that the major faux pas when talking to non-binary, transgender, or gender non-conformist people are to ask: about their former name, their body, their gender, and how they know they are that gender, their sex life, or any other invasive questions. Just don’t go there with any of these.

If you worry that you have misgendered a person when speaking, apologise quickly, correct the pronoun and move on, for example, “She went… I’m sorry, ze went to New York for the weekend”. The apology and correction show that you are mindful of their gender identity, respect the person, and understand the usage of gender neutral pronouns.

Don’t make excuses, or express how difficult you find remembering and using gender neutral pronouns – this is not about you. When you don’t have to think about or communicate your pronouns all the time you come from a position of privilege. It’s really down to you to learn more about gender neutral pronouns and try better to refer to everyone how they wish to be referred to.

How can I listen to my employees about gender identity?

The easiest way to gather information from your employees is via engagement surveys. You could send out a quick pulse survey to find out what your employees understand or know about gender identities and the use of gender neutral pronouns, as part of DEIB training. You could also use pulse or onboarding surveys to ask about gender. But keep the question simple, with an opt-out:

“How do you identify?”

Male, Female, Non-binary, Other, Prefer not to answer

When you do the work, make a conscious effort, ask when you’re unsure, and admit humbly and respectfully when you make a mistake, gender neutral pronouns can enrich the employee experience. It really doesn’t require much effort to learn about and use gender neutral pronouns, but they make a big difference when you’re nurturing a warmer, safer, more inclusive workplace for all your employees.

eBook: How to apply DEI to your employee experience program

Women in the Workplace
13 min read