Direct Discrimination: What is it and why does it matter to your business?

10 min read
Direct discrimination is a form of discrimination that can occur in the workplace and is considered as evidence of illegal employment discrimination. This complete guide covers everything you need to know about direct treatment and why it matters in your business.

Companies want to make sure their employee experiences are positive and inclusive. To that end, leaders may turn to diversity and equality policies and do their best to foster a culture of cooperation and fair treatment. But despite their best intentions, discriminatory treatment can still happen. When it does, it causes a significant problem for businesses and their employees.

One example is direct discrimination, a type of claim that can be brought against an organisation. It’s important that companies are aware of the rules, are familiar with examples of what direct discrimination looks like and know what steps to put in place to avoid future issues.

Why is direct discrimination important to your business?

This kind of discrimination is important as it impacts a person’s civil rights. In the UK employers must treat employees fairly, whether or not they have a protected characteristic, under the 2010 Equality Act.

If employers treat employees unfavourably based on a protected characteristic it may be against the law and give affected employees grounds to sue the company.

It’s worth noting that not all unfair treatment is illegal. An employer can be selective on the basis of protected characteristics because of the nature of the organisation or role. This is known as an occupational requirement. For example, an imam can be hired on the basis of being a Muslim because it’s essential for the role, even though this discriminates against people of other faiths.

Employers may also be allowed to discriminate when not doing so would unreasonably harm their business. For example a newly physically disabled employee at a ballet company may not be allowed to continue to perform her job as a professional dancer.

What is direct discrimination?

Examples of direct discrimination in business

Examples of directly discriminatory practices in business include: 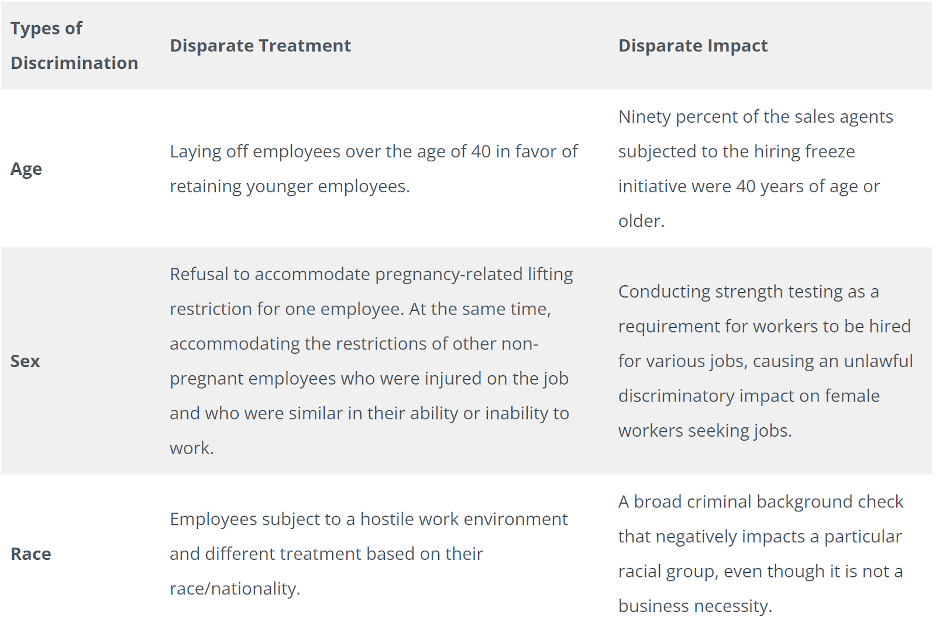 An employer may instate a rule or practice that is neutral and serves all employees, but would disadvantage people from a protected class more than others. This is indirect discrimination.

In cases of indirect discrimination, the employer unintentionally impacts people with protected characteristics by not considering that the same actions could disadvantage some people more than others.

For example, implementing and emphasising a drinking culture to socialise and bond teams may negatively impact employees that have religions that discourage drinking. By not taking part in social drinking, they are harmed in their job prospects and company inclusion.

Both direct and indirect discrimination are covered by the Equality Act 2010.

What impact can discrimination have on your business?

There are many ways discrimination can affect a business:

The knock-on effects of these impacts will reflect negatively on sales, company culture and employee productivity.

What can employees do?

Any employee or applicant to a company can claim they are a victim of discrimination on the basis of age, disability, marriage or civil partnership, pregnancy and maternity, race, sex, gender reassignment, religion or belief, or sexual orientation.

In what ways can direct discrimination be shown?

What happens if an employer is accused of discrimination?

In the UK, an employee typically begins the process by making a formal complaint, which is also called ‘raising a grievance’. Employers will have a formal grievance procedure in place which can lead to an employment tribunal.

The employee may also choose to report the matter to the police, where it may progress to a criminal conviction.

In order for them to take action under the Equality Act 2010, the employee must be able to show that they have been treated unfavourably (differently and worse) in comparison to an employee without the protected characteristic, known legally as a comparator.

How to avoid direct discrimination at your organisation

Prevention is always the best approach to tackling the possibility of direct discrimination.

HR professionals and leaders can work together to prevent this issue by:

The Society for Human Resource Management (SHRM) describes the nine action steps to creating a DEI initiative, which can be a helpful starting resource for employers.

As you build a culture of diversity and inclusion, you will be responsible for enhancing the employee lifecycle from start to finish.

For every change you make, you want to ensure that employees get the message, understand the new information and act accordingly. This is hard to do individually with large numbers of employees spread across different locations and with different language requirements.

Qualtrics solutions can make this process easier and faster. The one-stop solution keeps track of what is sent, who receives it and what the responses are. Language support is included, with easy follow-on and alert set-up, should you need to respond quickly to issues.

It can connect easily with existing systems to synchronise data and make reporting easy. This is especially useful if you need to prove documentation during formal proceedings.

And it’s not only useful in reacting to changes in the company. It can help identify issues in advance, by being used as a tool to communicate with your employees directly.

Employees can be asked for their feedback in annual employee surveys, online honesty boxes, satisfaction surveys and employer branding surveys. These can show how employees perceive the real-life conditions they face and give you early understanding so you can take action.

One On One Meetings
15 min read