What is non-probability sampling? Definition and examples

17 min read
Where can non-random sample selection be beneficial to your research? We explore non-probability sample types and explain how and why you might want to consider these for your next project.

What is non-probability sampling?

In fact, some research would deliver better results if non-probability sampling was used. For example, if you’re trying to access hard-to-reach social groups that aren’t usually visible, then a representative sample wouldn’t yield suitable candidates.

Instead, you may opt to select a sample based on your own reasons, including subjective judgment, sheer convenience, volunteers, or – in the above example – referrals from hidden members of society willing to speak out.

When do you use non-probability sampling?

Non-probability sampling is typically used when access to a full population is limited or not needed, as well as in the following instances:

What’s the difference between non-probability and probability sampling?

Probability sampling, also known as random sampling, uses randomisation rather than a deliberate choice to select a sample. This representative sample allows for statistical testing, where findings can be applied to the wider population in general.

Non-probability sampling techniques, on the other hand, pick items or individuals for the sample based on your goals, knowledge, or experience. This eliminates the chance of users being picked at random but doesn’t offer the same bias-removal benefits as probability sampling.

With probability sampling, there is an equal and fair chance of each member of the population being picked to be part of the smaller sample.

Conversely, in non-probability sampling, participants don’t have an equal chance of being selected. Instead, participants who hold desirable characteristics that fulfil your requirements are more likely to be selected.

Probability sampling techniques require you to know who each member of the population is so that a representative sample size can be chosen. The population acts as the sampling frame —  without it, creating a truly random sample can be difficult.

Non-probability sampling doesn’t need to know each member of the population before sampling. In some probability sampling methods, the sample grows on its own (snowballing) and sample participants can be sourced from one setting or location (convenience), irrespective of the total population.

Probability sampling aims to be objective in its sample selection method; it tries to remove bias by randomising the selection and making it representative. Along with qualitative data, you’re more likely to get quantifiable data that can be scaled up to make models.

Non-probability sampling is the opposite, though it does aim to go deeper into one area, without consideration of the wider population. The level of detail in qualitative data will be greater, though any quantitative data is confined to the boundaries of that specific group and is hard to scale to other people in the population.

Probability sampling requires that a proportionate sample quota of representative yet diverse people be selected before the research can begin. This can be hard to do when response rates are low or there are no incentives to get involved.

Non-probability sampling avoids this problem. As the sample only needs to have the right amount of people before the research can begin, participant sourcing methods can be more creative and varied.

Also, as the ideal candidates will have similar traits, once you understand where to attract them from, you can repeat the process until you have the sample size you need.

Free eBook: How to maximise your research ROI

There are four types of non-probability sampling techniques: convenience, quota, snowball and purposive — each of these sampling methods then have their own subtypes that provide different methods of analysis:

Convenience sampling is a common type of non-probability sampling where you choose participants for a sample, based on their convenience and availability.

You can see this type being used in public places, like malls or school campuses, where it’s easy to meet and select people as they ‘go by’ based on the characteristics and criteria that you think are important.

It is a cheap and quick way to collect people into a sample and run a survey to gather data. Because of this, it is usually used for quick user opinion polls or pilot testing. 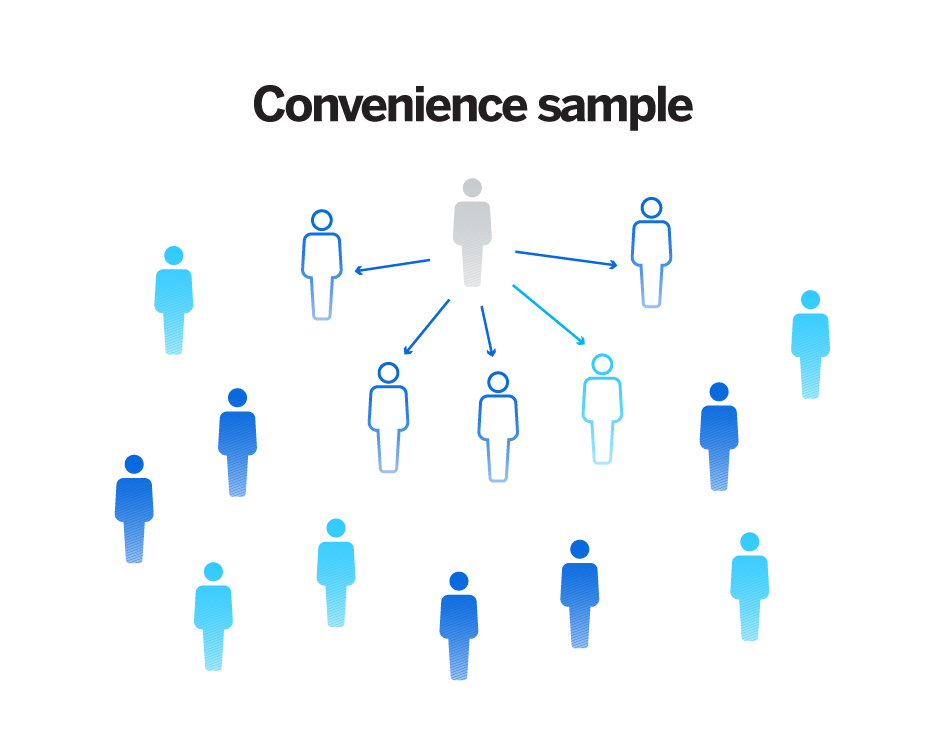 Consecutive sampling is the process of doing research with the sample members that meet the inclusion criteria and are conveniently available. You conduct research one after the other until you reach a conclusive result. Samples are chosen based on availability and each result is analysed before you move onto the next sample or subject.

The self-selection sampling technique uses volunteers to fill in the sample size until it reaches a specified amount.

This requires less work contacting people, as volunteers sign up and opt-in to be part of the research if they meet your desired criteria. The insights gained will likely be based on strongly held opinions that these volunteers want to share. An example is medical research candidates that opt into medical studies because they fit the criteria of the research study and want to be involved for health reasons. 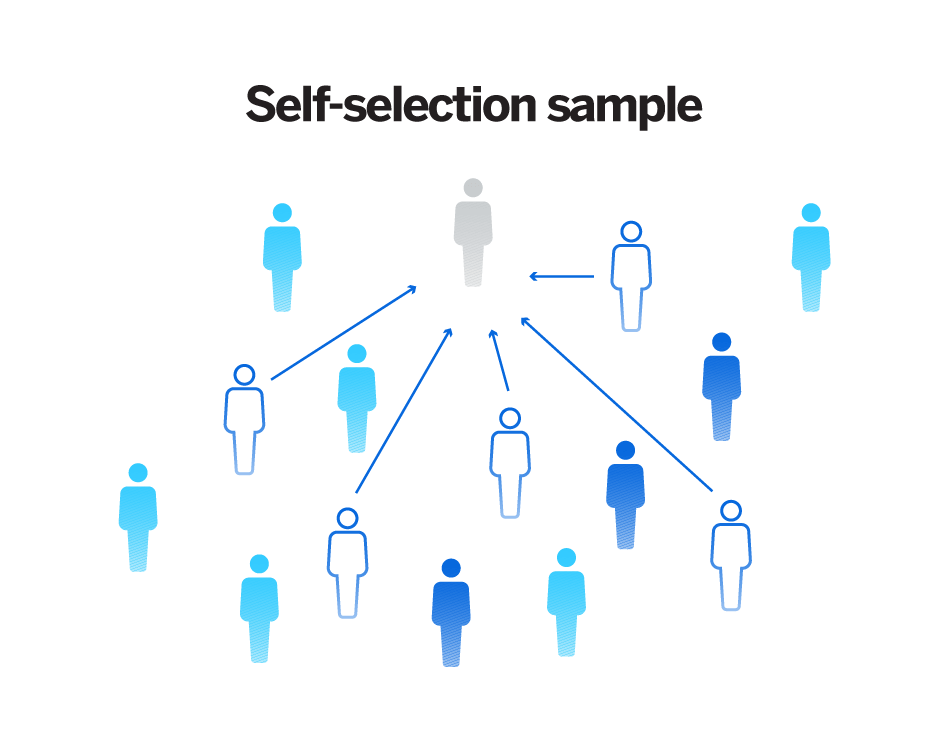 Quota sampling is a non-probability sampling technique similar to stratified sampling. In this method, the population is split into segments (strata) and you have to fill a quota based on people who match the characteristics of each stratum.

There are two types of quota sampling: 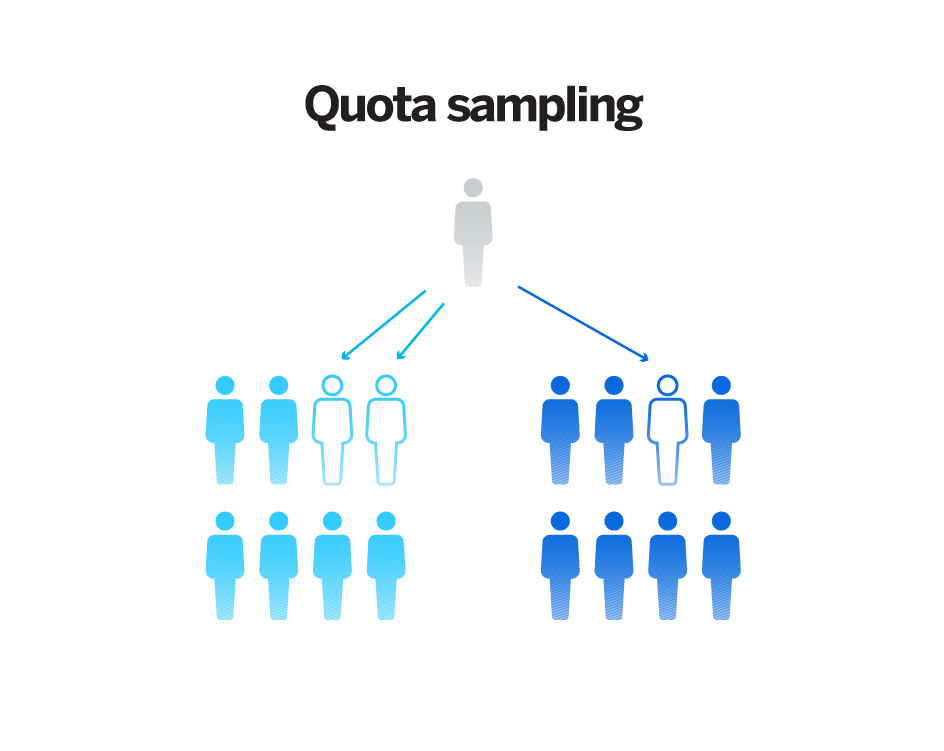 However, quota sampling techniques differ from probability-based sampling as there is no commitment from you to give an equal chance of participants being selected for the sample. Instead, you keep reaching out until the number in the stratum has been reached.

In general, quota sampling is conscious of the divisions in a population but still gives deep insights into each stratum.

Snowball sampling is a non-probability sampling type that mimics a pyramid system in its selection pattern. You choose early sample participants, who then go on to recruit further sample participants until the sample size has been reached. This ongoing pattern can be perfectly described by a snowball rolling downhill: increasing in size as it collects more snow (in this case, participants).

This type of sampling is useful for getting in touch with hard-to-access communities of people, like sex workers, homeless people, or teenagers. An example of snowball sampling is recruiting sample members through social media channels who then promote your work to those in their network. 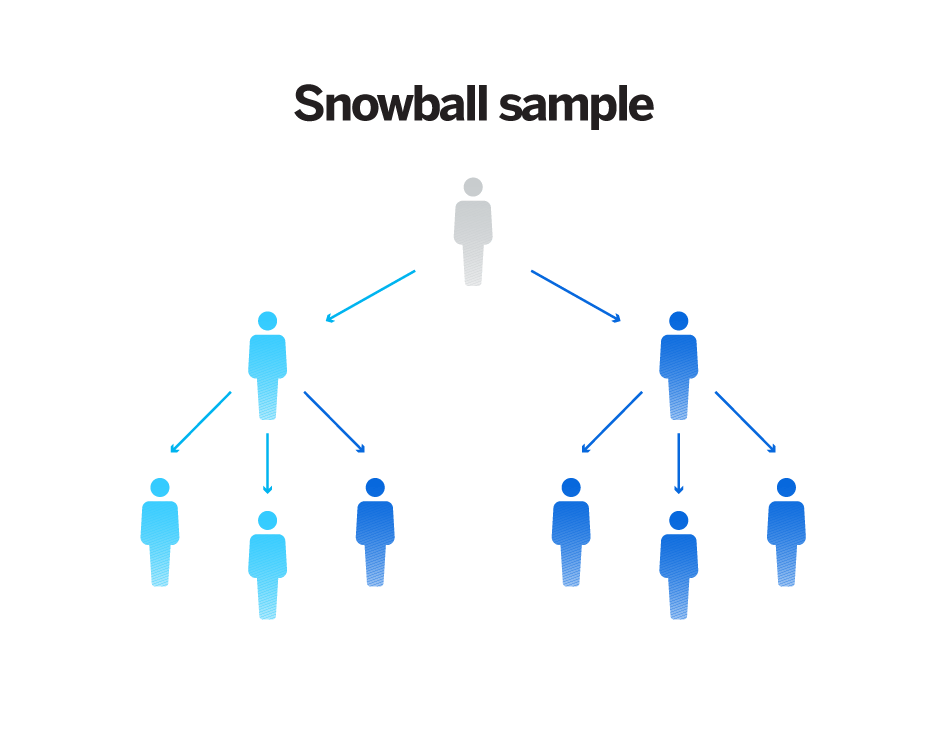 With this model, you are relying on who your initial sample members know to fulfil your ideal sample size. This can be quick to do when the chain of members develops past the first few levels. However, it does rely on the first members referring the research work to others.

Want to unlock more breakthrough insights? Use our research services and panels. With our proprietary online sample, you can get insights from any audience around the world and accurately track trends and shifts in your market over time.

You must validate whether a prospective sample member fits the criteria you’re after, though if this is confirmed, the participant can be added to the sample. There are obvious bias issues with this type of sample selection method, though you have all the freedom to create the sample to fit the needs of your research.

That said, your credibility is at stake; even the smallest of mistakes can lead to incorrect data. However, because this is a fast and easy way to source a sample, you can redo the sample quite easily if there is a mistake. 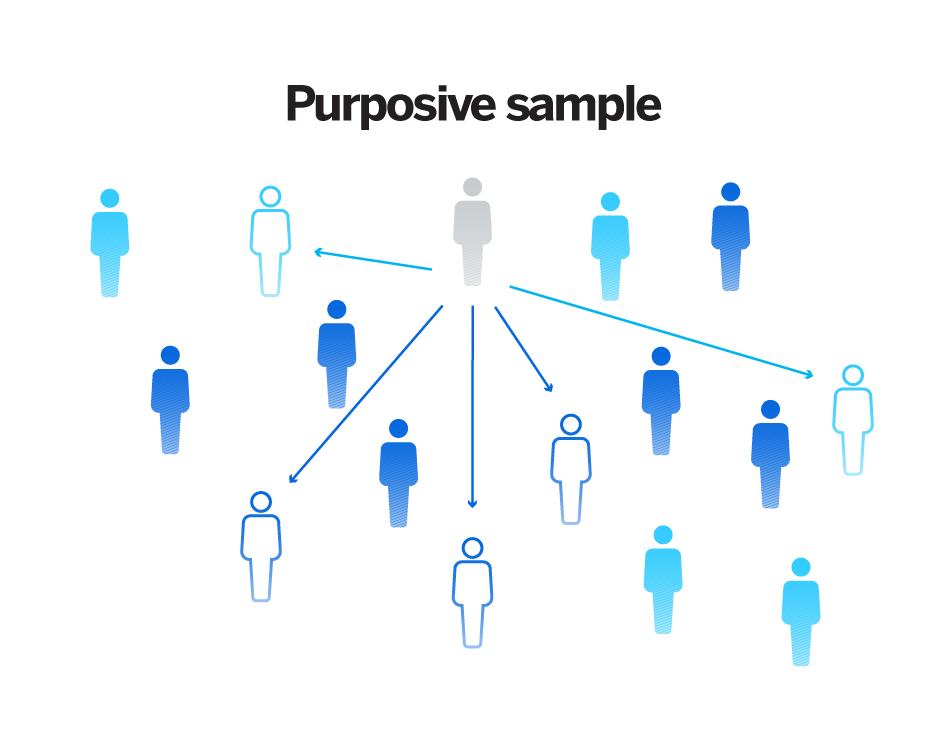 This is where you try to represent the widest range of views and opinions on the target topic of the research, regardless of proportional representation of the population. The main aims are to:

As such, having a broad spectrum of ideas from sample participants is key.

The opposite of heterogeneity sampling, homogenous sampling aims to get a sample of people who have similar or identical traits. For example, they might share the same views, beliefs, age, location, or employment. The traits selected are those that are useful to you in the research.

Instead of trying to see a topic from all angles, you focus on the research problem with a group of people who see it the same way and then go into detail.

This is where you choose the sample based on cases or participant characteristics that are unusual or special in some way, such as outstanding successes or notable failures.

By allowing a group of non-traditional sample members to explore a topic, the insights will be unique and unpredictable, meaning that this could be valuable for ‘thinking outside the box’. Of course, you need to put in extra effort to find, connect and manage relationships with these sample members.

When research goals call for a panel of specialists to help understand, discuss and elicit useful results, expert sampling could be useful. With expert sampling, the sample is chosen based on the knowledge of prospective sample members in a given area. This is best used in complex or highly technical research projects and where information is uncertain or unknown, though it can be used to validate other research findings by having an ‘expert’ vet the results.

Also, if you want to make sophisticated research easy, we can help. Just check out our solution that’s used by the world’s best brands to tackle research challenges and deliver the results that matter.

How to maximise your ROI

After reading through this guide, you should now have a better understanding of the different types of non-probability sampling techniques and how these sampling methods can be applied to your research.

But even with best practice, how can you maximise the ROI of the research that you do? With so much anxiety around financial and business health, many companies are reducing their research budgets and delaying projects. But with the speed at which consumers and employees are changing their behaviours, capturing insights and conducting targeted research has never been more important.

With access to real-time insights, you can empower your organisation to make critical, data-driven decisions to drive breakthrough change. And this is where our eBook can help.

In it you’ll learn:

eBook: How to maximise your research ROI