Every customer has their own programs, technologies, business goals and requirements to fulfil. Meeting these requirements often means making our systems work in harmony with theirs through Extract, Transfer, Load (ETL) automations, where the output of one system feeds into the input of another. CRM is an example of a system which exchanges data with the Qualtrics platform. It can be challenging and expensive to write these custom integrations on a per-client basis. However, good engineering is all about identifying and abstracting the high-level similarities and offering flexibility for the low-level custom elements of a workflow.

In this post (and the next) we’re going to talk about the philosophy and design of the framework we developed internally for optimizing and streamlining the creation of custom ETL automations for clients.

Given the frequency of client requests, Engineering Services (EMEA) didn’t want to keep reinventing the wheel every time custom work was required (engineers hate that!). We wanted a robust, solution that was streamlined, could be extended for custom functionality, could be well maintained, and could enforce good standards. We wanted it to be developed to run reliably and predictably making life easier for different teams, engineers, partners, solution architects, and on-call engineers.

For part 1 I’m going to talk about about the many decisions that were made in order to  achieve this goal. Specifically, I’ll focus on on architecture (AWS / Terraform), design (release engineering, project structure and design patterns), development philosophy, and automation.

An ETL automation, in the more specific context of Qualtrics Engineering Services, is:

An automation which takes input from a client, processes data through the Qualtrics systems and provides an output to the client, such that the client’s system and data model can integrate seamlessly with ours

Below is one such example. 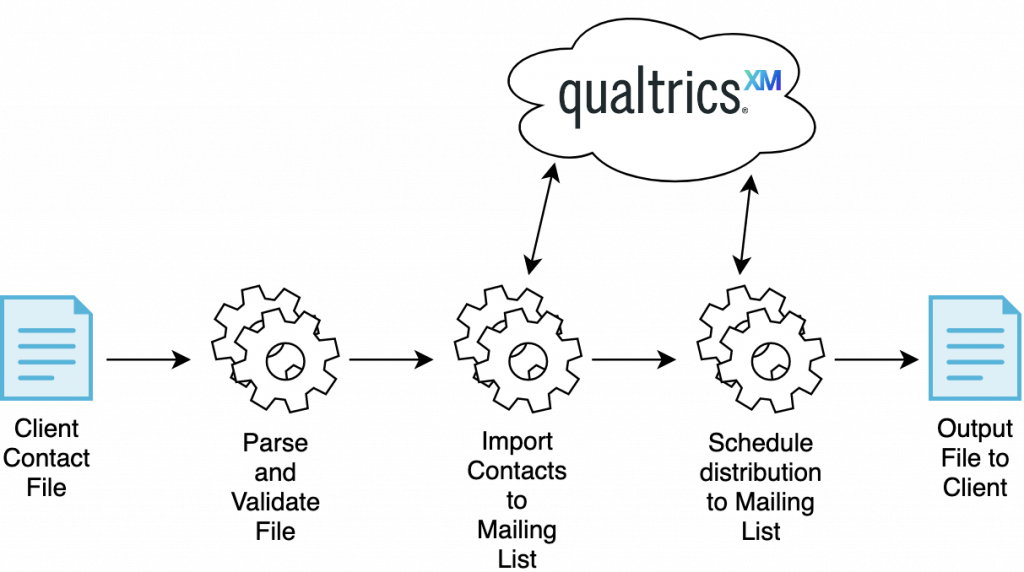 Many automations follow this kind of workflow (such as response imports, metadata imports, etc), but most of them require non-trivial custom engineering at some point. This custom engineering may involve parsing and validating the input file, enriching the data, mapping the data (from an old vendor to Qualtrics), conditionally scheduling distributions, conditionally sampling contact data, and more. These types of automations, with custom code sprinkled throughout, were the target for this framework: we wanted to focus on custom automations that were beyond our ability to simply define through basic configuration files.

Ultimately, we wanted to use this framework to automate the generation of boilerplate projects (full source code repositories) so as to guide the developers into good standards and practices:  encompassing infrastructure as code, binary/config packaging and release engineering.

So why impose certain standards for project structure and source code methodologies? First, we want to ensure consistency across projects; consistency leads to simpler maintenance, less ramp-up for handovers, faster comprehension for on-call engineers, and stronger vision and direction to guide projects to completion. Equally as important as consistency is speed: we wanted to cut design and development time from the induction of these projects.

And why a framework? Given the conceptual similarity of many ETL automations, it’s important to define these workflows carefully and abstractly with default implementation for the most common use cases. This way engineers do not have to repeat any tasks, and duplicate code isn’t scattered across project repositories. But we want to give developers the freedom to extend this default functionality, if needed. This has many benefits:

Why did we choose to build this framework on top of AWS?  In Qualtrics Engineering Services we use a standalone infrastructure model which provisions new AWS cloud environments on a per-client basis. This has a few benefits:

Now, let’s take a look at the high-level design and architecture of this framework. To do this we’ll investigate the common workflows of ETL automations in more depth. An ETL Automation generally consists of the following stages:

The pre-processing stage may involve pulling the source data from a client’s SFTP Server (or S3 Bucket), or consuming a client’s POST request to an API endpoint. This stage subsequently parses, validates and formats this data, pushing it to the processing stage of the workflow. The post-processing stage essentially performs the same steps in the reverse direction (as an export to the client rather an import from the client).

It’s good practice to have a single Qualtrics API call associated with a single processing step. Why is this? Well, if one step fails using the output of a previous step (which was successful), we want to retry only the step that failed which will allow for idempotency across the general workflow, when including retry logic.

To make this concept more concrete, we will represent each step discussed above as an independent and well defined service in AWS. Each step consists of a microservice (Lambda) which processes the request input, and outputs the result to the next step (i.e next service).

Lambdas are very powerful for this use case.

There are a few general pitfalls with Lambda however:

In an ideal world we could join up microservices like this:

The problem with the above example, though, is that it doesn’t account for failed steps.  For example, how our ETL behaves if the “Import Contacts” step failed? The Qualtrics API in which the Contact Importer step depends on may have high availability, but there is always the possibility of failure. Even worse, these automations often run on similar cron schedules hitting the same API endpoints, which can only increase the likelihood of failure. We can incorporate retry logic for each Lambda, but that doesn’t really scale laterally because of the aforementioned cron problem. So what do we do? In this case, we introduce queues (SQS), because queues can:

In summary, our high-level visualization of services in relation to our example workflow looks something like this:

As we can see each service is represented by a Queue and a Microservice. This encompasses a single block / function, a reusable component which we can develop and maintain independently and inject into any project or workflow.

Finally we want to be able to make these services extensible. To do this each microservice (lambda) imports an abstract library which is maintained internally by Qualtrics. The classes / modules available through the library contain methods with default functionality, documented and exposed to the developer, such that they can be overridden to suit the developers requirements. These protected methods should have well defined interfaces and conceptually solid use cases to guide the developers properly. We’ll talk about this more in the implementation section.

Overall, this service-oriented architecture is the foundation of the framework.

In this post we talked about the design of a framework for developing custom ETL automations, and the reasoning behind it. In part 2 we'll  dive deep into the more nitty gritty implementation details, in particular, Terraform and Serverless.