Today, Qualtrics is introducing district dashboards in preview, the latest iteration of the National COVID-19 School Response Dashboard. Earlier this fall, we partnered with Brown University Professor Emily Oster and various school superintendents and principals associations to unveil the dashboard – the first nationwide effort that systematically maps schools’ responses to the pandemic across the U.S.

The district dashboards are privately accessed, available only to the participating school district. Each district dashboard displays information similar to the types of data available on the public national dashboard, such as percentage of confirmed cases, daily case rate, and mitigation strategies. Additionally, each district’s (or school’s*) specific information is benchmarked against other districts or schools in their geographic region (at the state level), and districts or schools with characteristics similar to their district, such as student demographics or community size. 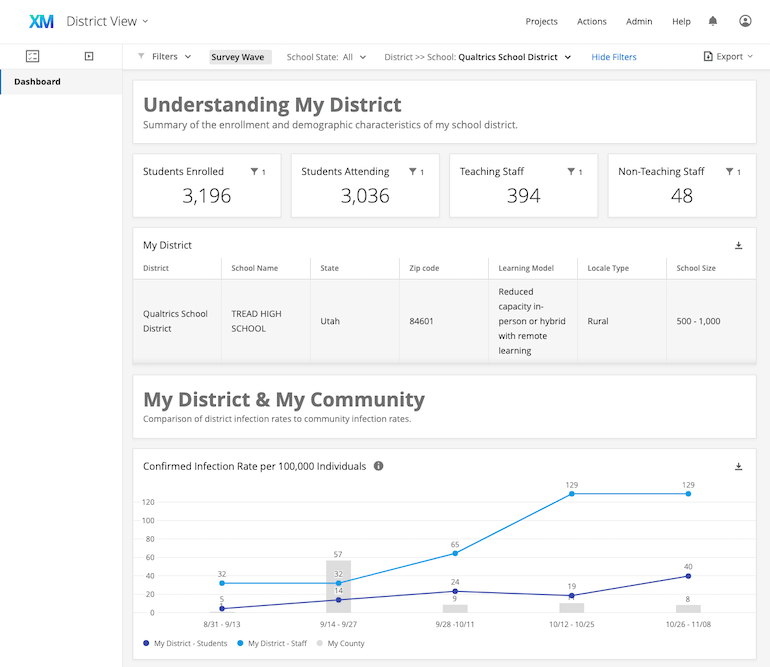 District dashboards will enable district administrators to better understand the state of their community’s health and outcomes relative to their broader geographic community and districts with similar characteristics. Any community case data reported on the dashboard is based on publicly available data as reported by public health resources.

District dashboards are free to any participating district in the national dashboard. If you’d like to learn more about the National COVID-19 School Response Dashboard, participate in this initiative, or get in touch with a team member, visit covidschooldashboard.com.

Who will have access to view the district dashboards?

The primary point of contact reporting to the national dashboard will have access only to their district’s dashboard.

How many districts participating in the national dashboard will have access to their own district’s dashboard?

Can my district modify or customize data that we see on our district dashboard?

No, the district dashboards provide information based on self-reported data by the district and/or school, and publicly available data.

Will every district dashboard have school-specific information within their district?

School-level data will only be available if it was self-reported in the enrollment or biweekly surveys.

* School-specific data is available only to districts who have reported this information.

Ushering in a new era of experience management with Experience ID

Getting started: tips for optimizing your in-app customer experience

How Uber is building a new age of intelligent CX

From Disney to doctors: The uncommon path of a patient experience leader

How to use patient surveys to improve your healthcare service