How to run a successful ad testing program

15 min read
Give your advertising the best chance of success with an insight-driven testing process. Find out how to run your ad testing program

What is ad testing?

Ad testing is simply the process of vetting your ad concepts with a representative sample of your market. It establishes an ad’s effectiveness based on consumer responses, feedback, and behavior. You can test multiple ads, a complete ad, or even portions of your ad to make sure your ads will resonate with your target audience.

Why test your ad?

No matter how much money you throw at your advertising campaign, which celebrity endorses your product, or how many expensive special effects it includes, if it doesn’t resonate with, and influence your target audience, it’s wasted ad spend.

Ad testing has several tangible benefits. Consistent pre-testing improves an ad’s effectiveness by at least 20%, according to Millward Brown. Not only that, an ad’s content and creativity influenced profits four times more than media placement alone, according to research in AdMap.

Advertising is often one of the primary tactics in a marketer’s plan. The planning, production, marketing communications, and media costs can all add up. Particularly if you want your campaign to reach far and wide. Ad testing is how you make sure ad spend is worth it.

As you look to maximize the ROI of your adverts, ad testing can help make sure your advertisement resonates with your target audience, leading to a better conversion rate and helping to cement your brand and boost the positive associations that come with it.

How do you test advertising effectiveness?

Quite simply, with market research:

The first step to testing ads is coming up with great concepts, but crafting the perfect ad can be a daunting task. The following guidelines can help you lay the foundation for a winning ad.

First things first: What do you want your ad to achieve? Is it raising awareness of a new product? Driving more sales of an existing product? Promoting your brand? This desired outcome is known as the ‘advertising effect’, and it’s a key ingredient to include in your survey questions.

To test your ad’s performance, you first need to have a clear picture of what success will look like.

Test before, during, and after launch

Pre-testing ad concepts can help you make sure your campaign starts on the right note and avoid costly pitfalls. In-flight monitoring of a campaign shows you the performance arc across its lifecycle, helping you pinpoint where conversions occurred and how sentiment and purchase decisions evolve over time in response to your ad.

To test an ad concept, you should work with a pre-selected segment of your audience that represents the target group for the campaign. For example, people in a particular age group, those in specific job roles, or a combination of qualifying criteria.

This group can then be surveyed to see how they respond to different versions of an ad, or different ad concepts.

eBook: How to test and launch effective ads

Each method you use to test ads has tradeoffs: 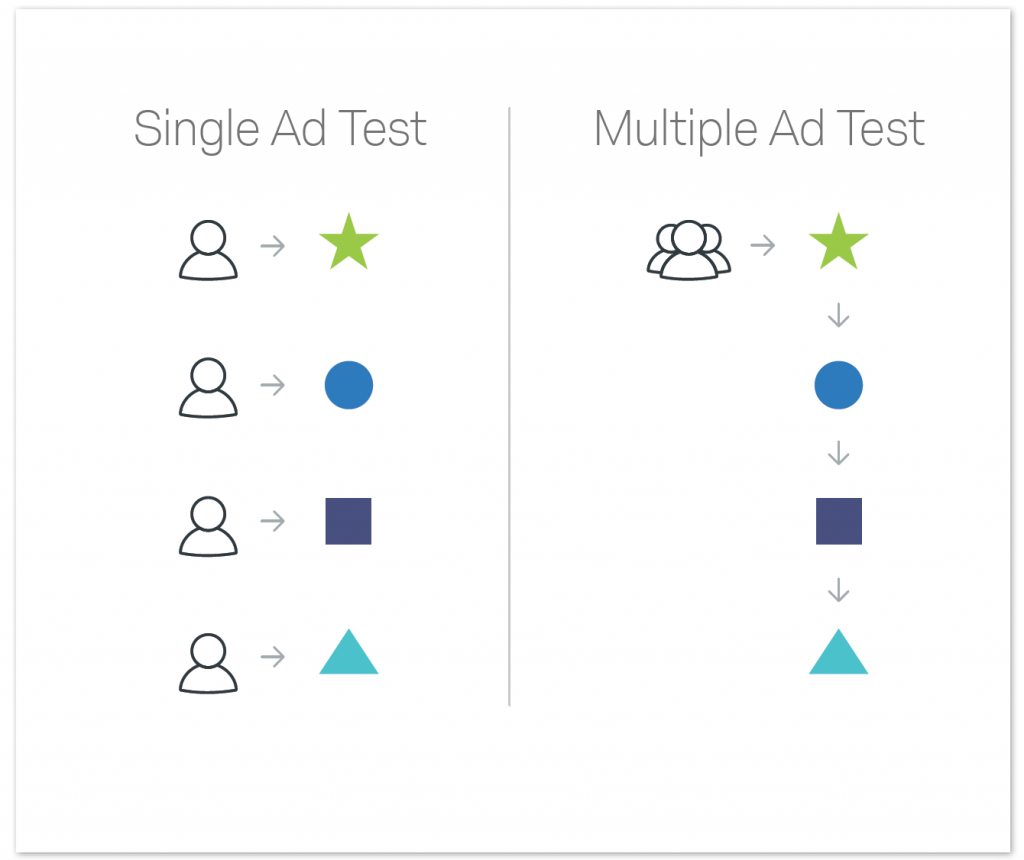 There are several questions you will want to ask in your ad testing survey about each ad:

As well as collecting all the metrics about opinions and reactions, be sure to add a few fields that request age bracket, gender, profession, and any other demographic metrics you’re interested in. This information could help you to target your ad towards the right people once it has been created.

What style of questions should you use?

Use a mix of question styles. Make sure the statements are written in a neutral tone of voice, without any more words than necessary, and avoid emotive or descriptive terms that might bias the response.

For your ad test, you’ll be dealing with ideas or constructs that range from positive to negative, such as:

How appealing is the ad?

How believable is the ad?

How relevant is this ad to you personally?

You’ll want to break your report into two different sections – overall findings and individual ad results. Your overall findings will give you an indication of which ads had the best initial reactions and are the most likely to drive sales. Individual ad analysis will allow you to dive deeper into the details of each individual ad to identify any weak spots.

If you have a lot of open-end comments, reviewing each comment one by one can be tedious and time-consuming. To make this process faster, a text analytics software like Qualtrics Text iQ can make quick work of your open text responses, allowing you to see both key topics and sentiment of your ads.

You can further hone your ad concept by iterating it through multiple rounds of testing and tweaking it in response to what your audience is telling you. These iterative results are valuable in the longer term too – they can help steer your creative team away from ideas that weren’t successful in testing and focus them on what works well for a given audience.

There are various types of advertisement tests, falling into three broad categories:

Tests that gauge how effectively an ad performs on key communications metrics like Ad Recall, Service Attributes, and Communicating Benefits.

Measures how effectively an ad changes perceptions and opinions through metrics like Persuasion, Personal Values, and Higher Order Values testing.

Tests the success of campaigns intended to drive actions, such as purchasing, using Response and Ad Effectiveness tests.

Advertising is a key part of your branding strategy. Learn how to track your brand awareness for optimum business outcomes.

How do you choose the right platform for ad tests?

This is ‘what happened’ operational data (O-data) which reports factually on the interactions you care about. But this isn’t a joined-up solution. The ad that was a roaring success on Instagram is unlikely to work in the same way if you transplant it as-is to Facebook.

The more joined-up solution is to use experience data (X-data) that can unravel deeper meanings behind operational facts and figures. This is centered around the people you care about, rather than the things that happen. It’s all about the experiences they are having, what they value, what turns them off a purchase, and what drives their decisions.  Data flows into a single platform through sentiment, rankings, and ratings, or in the customer’s own words through reviews and customer service conversations.

In the case of ad testing, the people you care about are likely to be your prospective customers, or the audience groups you’re targeting with your ads.

If you want to learn more about ad testing, you can read our additional article that provides further detail about questions to ask about your ad testing program.