How to avoid common pitfalls in your DEI strategy

Embedding DEI across the organization drives better outcomes for all. But too often, DEI initiatives become siloed without creating impact. Here’s how to stay on track and create lasting change.

Diverse, equitable and inclusive organizations outperform their peers where it matters most – against metrics like growth, time-to-market, profitability and innovation. But decades of so-so progress suggest most organizations are still struggling to build momentum on DEI.

More than ever, customers and employees expect to see meaningful progress on diversity, equity and inclusion from the companies they engage with. But DEI isn’t just a look-good, feel-good initiative.

For years, diversity, equity and inclusion has been linked to better business outcomes – and McKinsey’s latest analysis, Diversity Wins, finds the business case for diversity is stronger than ever.

When you embed DEI thinking across the organization as a core operating principle, you drive better outcomes across everything you do.

But too often, DEI initiatives splutter and stall.

In 2020’s Diversity Wins, for example, McKinsey discuss the progress of hundreds of companies they’ve been tracking since 2014. They conclude “some are making impressive gains in diversity” but “most have made little progress, are stalled, or are even slipping backward”.

Far from proving progress to employees and customers, these stalled initiatives breed cynicism and distrust. Far from driving competitive advantage, they drain time, cost and credibility. And they hurt resilience and agility, right when those capabilities matter most.

The truth is, organizations have been seeking measurable progress on DEI for twenty years – but most aren’t any closer to their goals today

When an organization tackles DEI as an initiative or a program rather than a strategic imperative, we’ve seen time and again that it simply doesn’t stick. The end goal is to continually bake DEI into everything we do – that’s when it becomes truly transformational

When DEI is sewn into the fabric of the business, it becomes a true lever for competitive advantage. But too often, organizations treat DEI as a series of important but discrete programs – rather than one, joined-up, continuous strategic imperative.

True progress on DEI depends both on behavioral inclusion – inclusive mindsets, skillsets, and relationships – and structural inclusion – policies, processes and practices that work for everyone.

This latter is a common missing link, so processes often act as an invisible barrier to change.

Many organizations are only just starting to realize the importance of structural inclusion in their talent practices. For instance, talent acquisition teams might have had excellent unconscious bias training for years, say. But unless you’ve also redesigned structures around attracting, sourcing, interviewing, hiring and onboarding, breakthrough progress can’t happen.

Organizationally there may be agreement about where we want to go. But what can really frustrate change efforts is, where are we now? If we can’t reach consensus on our starting point, we can’t prioritize the right steps to move forwards

To create a roadmap towards your DEI goals, you need consensus about the starting point. But organizations are often overwhelmed by myriad disjointed initiatives scattered across the business. There’s little joined-up visibility – so there’s no ability to establish a baseline to move forwards from.

Too often then, organizations rush into building a DEI program that tackles only short-term symptoms. Investment is often huge but measurable results don’t follow. And with every lackluster initiative, pressure to improve increases – from employees, customers and shareholders.

Let’s talk about how the DE&I Compass helps to overcome these roadblocks.

Organizations often have a heap of good intentions but without the rigor of measurement and accountability behind them. That’s where the DE&I Compass is valuable

The Korn Ferry DE&I Compass – powered by Qualtrics XM – illuminates your company’s DEI landscape using scientific data, not anecdotes. But crucially, it also combines diagnosis with analysis and recommendations – to give you a clear roadmap to drive momentum on DEI.

Shining a light on your current reality

The DE&I Compass harnesses our world-leading Experience Management platform to deliver a powerful DEI pulse survey across the organization. Nobody’s better placed than your people to tell you what’s working, what’s not, and what matters.

These results map onto Korn Ferry’s unique circular DE&I Maturity Model, showing how you’re performing on diversity – both behaviorally and structurally – against five strategic dimensions, from the inside-out. 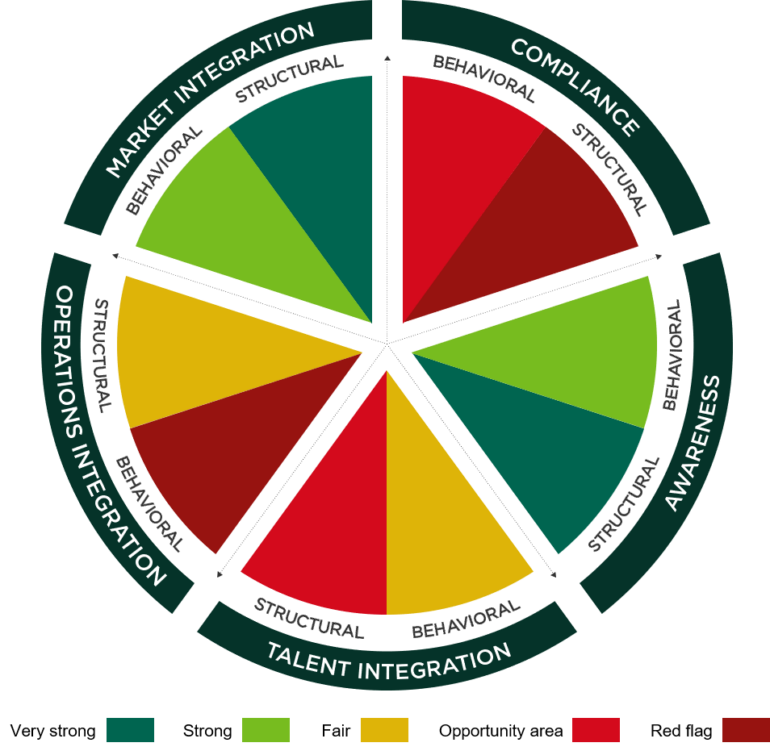 The DE&I Maturity Model recognizes progress on DEI isn’t linear – and without this inside-out model, excellent progress against one dimension might easily obscure a need for action elsewhere.

That’s critical because DEI can only become transformative when you systematically progress across each dimension. That’s when DEI becomes a core operating principle.

Moving towards your ideal future vision

The critical thing is, the DE&I Compass won’t leave the organization stuck or confused about where to make progress. You’ll know exactly which actions to prioritize – and how

Our 2021 Employee Experience Trends report found 92% of employees believe it’s important their company listens to feedback – but only 7% say their company’s doing a great job.

Nowhere is that feedback-action gap more damaging than in DEI. The stakes are higher when you’re asking about such emotive topics as belonging and inclusion.

You either prove your commitment with action or take one step forward and two back by uncovering institutional apathy that reinforces cynicism and makes progress harder.

That’s why it’s so important the DE&I Compass isn’t just a diagnostic tool. It’s a system of action, supported by Korn Ferry’s specialist DEI consultants helping you digest the results and determine your best path forwards.

To empower you to build a joined-up DEI strategy that continually improves experiences for your people.

Farren Roper // Head of Diversity, Equity, and Inclusion at Qualtrics

Farren is the Head of Diversity, Equity, and Inclusion at Qualtrics. He works to level the playing field for all Qualtrics employees globally to allow everyone’s unique brilliance to shine. He believes that when we all play, we all win. Prior to his career in DEI he worked as an attorney, marketer, and serial entrepreneur. He is a Ted Talk speaker and originally from South Africa.

The top employee experience trends in 2023

How Unilever is getting to the root cause of employee uncertainty

Why HR is critical in improving ESG performance