TACOS at Qualtrics: A History of Culture

Contrary to popular belief, not everything monumental for Qualtrics starts in a basement. So, it is with a deep sense of irony that a deep dive into the pillars of the Qualtrics culture - affectionately known as the TACOS - reveals a startling truth. When the day came to sit down and understand what made people at Qualtrics the best Qualtricians - the team gathered in a basement.

Transparent. All In. Customer Obsessed. One Team. Scrappy.

“Instead of saying, “What should our culture be?” Ryan asked us, ‘If we’re going to document our current culture, what would that look like?’,” Kylan Lundeen, Director of Marketing, shared.

It was nearly three years ago that the executive team gathered to address the question: “What describes us?”. Rather than starting from singular words, or aspirational statements, the team started with thinking about the people who were the “most Qualtrics” of everyone at the company. “We asked, ‘Who are the people who are the raddest culture adds at Qualtrics?’ and what is it about them that embodies ‘us’ the most?” said Kylan.

Person after person was highlighted by the group, identifying the characteristics which brought that person to mind. What emerged were the building blocks of Qualtrics culture.

“I think when it was done, and we’d gone, ‘Yeah, that sounds like being ‘All In’’ or ‘That’s definitely Customer Obsessed’, we had something like ACTOS highlighted as the acronym.” In what may be one of the most notorious pieces of Qualtrics Urban Legend, it is believed that earlier in the evening the team had frequented a favorite local restaurant where tacos featured prominently in the meal. “It was actually Chris Beckstead who brought it up, saying that if the letters were moved around it would spell ‘TACOS,’ and it was like - there we go. It was locked.”

The Future of TACOS

The TACOS (and tacos) have been bringing the people of Qualtrics together for many years, but the question that is continuously asked of our leaders is how we’ll keep the culture the same. What the Qualtrics team has recognized - and is adamant about - is that being a part of Qualtrics is being part of a growing organization in every way.

The culture of Qualtrics will continue to develop right along with the business. While we remain grounded in the cultural pillars of the company, we also remember that there are people out there who are more TACOS than we are now. People who are more All-In or Customer Obsessed than we’ve met before. We grow bigger with them, and we grow better because of them. It’s how we remain grounded in the culture of Qualtrics, rather than inhibited by it.

The TACOS aren’t just a story of what Qualtrics Leadership has determined the culture to be. Russ Laraway, VP of People Operations, says, “culture is something that lives in every one of us. Great companies carefully define their culture through their core values. Once you do that, you hire people who express those values long before they join your company. This helps ensure that as the company grows, the culture is enhanced, not diluted.”Throughout the year, we seek to understand how these core values resonate with the Qualtricians across the globe - check out some of the results.

We asked the team - “People at Qualtrics are…

”Over 65% of Qualtricians said they “agreed” or “strongly agreed” that their peers were described by each of the TACOS. 83% of respondents said they “agreed” or “strongly agreed” that the people around them at Qualtrics were “All In.”Across our teams, we found that 90% of Research Services believe people are “All In” and “Scrappy”. Our newest employees believe their peers are the most “Transparent,” while Qualtricians with more than 5 years feel that people here are “Scrappy” above all the other values.But let’s break this down a little. We took a deep dive into each of the TACOS and exactly what behaviors we’re seeing that demonstrate we’re living out each of the values. 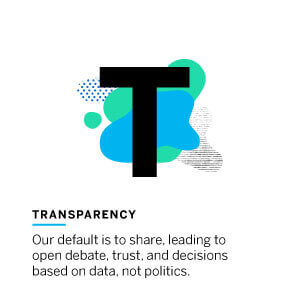 For transparency, we’re building a culture where the default is to share with one another. And one where we debate, trust, and make data-influenced decisions.So when 84% of your company says it understands the company strategy, we’re moving the right way. Especially when 82% of Qualtricians say they feel well-informed about important activities at Qualtrics.As we chart our careers, it’s important that we have the support and guidance of our managers. Overall, 83% of people at Qualtrics feel their manager is helpful in navigating how company changes impact their career, and 85% of engineers specifically feel their manager is helping them in those moments. (We hate to brag - but we’ll mention the industry benchmark is 72% normally in these areas.) 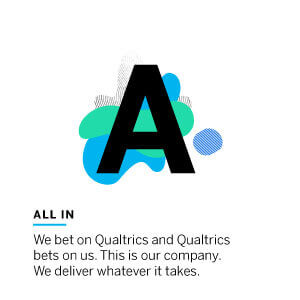 All in is a simple concept: we bet on Qualtrics and Qualtrics bets on us. This is our company. 94% of Qualtricians say they agree with the statement that they’re willing to put in effort beyond what is expected of them. Beyond that, 87% of Qualtricians agree that they “are proud to work at Qualtrics.” And 86% of the team agrees that they would recommend Qualtrics as a place to work. 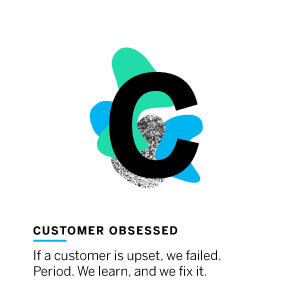 When it comes to being customer obsessed there is only one mantra: If a customer is upset, we failed. Period. We learn, and we fix it.Qualtricians came back to us to say that 87% believe that the executive team is committed to providing high-quality products and services to customers. 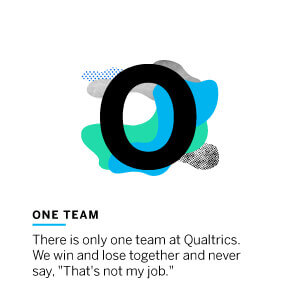 The idea of one team is a straightforward one. There is only one team at Qualtrics.70% of Qualtricians responded positively when asked how collaborative as “one team” people at Qualtrics are. And when it comes to inclusivity, 82% said that Qualtrics is positively inclusive, calling out that 82% of people believe that different types of people (i.e. people with different backgrounds, ages, or opinions) collaborate well at this company. 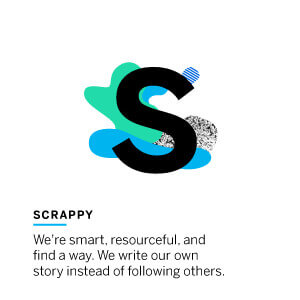 Being scrappy means that we're smart, resourceful, and find a way. We’re quick to call out that it doesn’t mean doing more with less for the sake of things. But scrappy means that we max out what we can do with what we have and won’t give up as barriers present themselves.93% of Qualtricians say that we are very or extremely resourceful at achieving goals with what is available to us.

We have a strong set of values at Qualtrics. Values that we proactively look to grow and live out. The TACOS are a part of the language in conversations around the business. It’s not shocking to hear a leader thank someone for their transparency, or have someone acknowledge a co-worker as having been “all in” on a project. It is down to each member of our team to continue to “manage” the culture of Qualtrics. We own it and grow it together as a team.

Qualtrics is growing, and if you're ready to find your "why" at a place like this, you can explore our open opportunities at any time by visiting our career page. Looking to discover the reasons "Why Qualtrics"? You can find an entire story series from the team here.

3 years of Military Friendly® recognition for the Qualtrics team

Celebrating Veterans Day: Beyond the uniform