I dedicate this to the memory of my father, Dr. Isaac Alteras, who passed away on April 10th, 2022.  He was a Professor Emeritus at Queens College of City University of New York, a scholar, historian, and author on European, American, and Jewish history.

I am the first person in my family to have been born in the United States. My family hails from Eastern Europe – my mother’s family is from Czechoslovakia and Hungary and my father’s family is from Romania. They came to the US in the 1960s, but 15-20 years prior to that, they were hiding from the Nazis in Europe. They survived and for that I’m grateful. My parents and grandparents held their memories of survival very close to their chests and would not speak about the things they experienced because of the trauma. Sometimes it pains me to think about how much larger my family could have been if not for the Holocaust.

My relationship with Judaism was not always positive when I was growing up because, as a Jew in America, it is very easy to feel like an outsider – even growing up in the most diverse city in the United States. I was born and raised in Queens, New York, a city and neighborhood that has a strong Jewish presence. It wasn’t until I started junior high school that I was spending more time with kids from other backgrounds and cultures. I cannot say that there was no antisemitism in my orbit growing up – kids could be cruel and it hurt to be left out or teased because of my upbringing, which I obviously had no control over. I also did not understand the sacrifices made by my family and my people. As I got older and had more life experiences and learned more about my ethnicity and culture, my relationship with Judaism and my Jewish identity became stronger.

In 2006, I left New York City for a job in Texas and moved there with my two children who were 10 and 7 at the time. I remember clearly, one day in December, my children asked me what we were going to do for Christmas. I was surprised they asked me this question because we had never celebrated Christmas before, but what really alarmed me was that after a few months in Texas, they quite literally did not realize they were Jewish. I took this as a huge fail on my part, but it was also a huge learning moment. The shock and disappointment I felt when my kids asked this question was the moment that I realized that being Jewish is a major aspect of my identity – not just for me, but for my children and my future grandchildren and so on. We may not have suffered as our ancestors did, but we need to carry on the stories, culture and appreciate the sacrifices of our ancestors which go back over 5000 years. 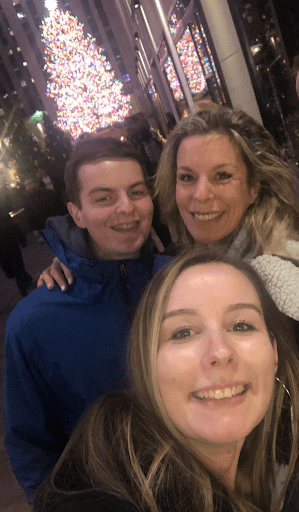 What it also taught me is that we were not in New York anymore – the schools my children attended did not include non-Christian holidays in their holiday lesson units. I remember being so taken aback that I spent hours cooking a massive quantity of potato latkes (potato pancakes – a customary dish for Hanukkah) and brought them to the kid’s classes to share and tell them a little bit about Hanukkah. We left Texas and moved to Seattle in 2008, not knowing a soul. The first thing I did was reach out to a local synagogue, which accepted my children and me with open arms. The fact that this was an Orthodox Jewish synagogue and I barely ever attended services did not matter to them, and I will be forever grateful to the Chabad synagogue for essentially taking care of us until we were able to get our bearings in our new city. My children have been bat and bar mitzvahed in Seattle, and they now embrace their Jewish identity in a way that makes me extremely proud. For me, joining Qualtrics has been a wonderful experience in the sense that acceptance of our differences in beliefs is part of the fabric of the company and all the people who work here. Being asked to share a bit of my story is a tremendous honor, and I am proud to work with people in a company that encourages learning about different cultures and beliefs.

I have learned throughout my life as a Jew that antisemitism is so subtle yet still so pervasive, even here in the United States. Here is a thought exercise. Imagine the following scenarios, and think about how you would feel:

I consider myself to be so lucky to be born in this era and in a country where such experiences are not constant threats. However, every one of these scenarios is one that I have experienced myself or witnessed happening to my family and friends. Antisemitism is still here and it is very real. I hope that my children's children experience a world where their beliefs, culture, and history are accepted, shared, and carried on.

Honoring Service: A Tribute to Veterans

Tanner, Software Test Engineer, on the freedom to brainstorm and solve problems at Qualtrics