5 power of persuasion techniques to use immediately at work

Exactly what is the psychology behind persuasion?

We may think the power of persuasion is the ability to convince people to come around to your way of thinking, but it’s more than that.

The American Psychological Association defines persuasion as “an active attempt by one person to change another person’s attitudes, beliefs, or emotions associated with some issue, person, concept, or object.”

You don’t need aggression, hostile words, or any force to influence someone. Persuasion is getting a person to a state where they feel completely at ease around you, pay attention, and trust your judgement.

Their behavior and actions will change accordingly — for example, those influenced may go ahead and support the perspective you’re putting forward or commit to going in a particular voting direction.

When you’re able to deliver persuasive messages, your social influence grows within your team, and your self-perception will as well. You may feel a great deal more confident or feel a positive sense of pride in your abilities.

People who can influence often are seen as leaders and become a source of inspiration for other people. They can be called confident or charismatic.

How is the power of persuasion used in business?

The power of persuasion is active every day at work. People work with team members and managers, who, in turn, all work with each other. In any given situation or relationship, you will need to make suggestions, put forward ideas, and make decisions. During these interactions, two people are communicating and one is trying to persuade the other.

Sometimes these interactions can be successful and healthy because there are clear seniority levels between people’s levels and this can influence what is decided. For example, when you’re asking your direct reports to send you their end-of-week reports, they acknowledge your authority and that influences them to agree to deliver the reports.

Sometimes, the interactions can be tougher, especially between peers at the same level, or if there is a lot of pressure to stand out. Here, influencing your peers to take action and support your way of thinking may need more techniques.

How can good persuasion skills be an advantage at work?

The good news is that anyone in the business can learn this soft skill and knowledge to become good at persuasion and influence. People tend to think that only certain management levels or departments (for example, sales, and marketing) need to use persuasion because of the client or employee-facing nature of the jobs.

In the short term, the power of persuasion can help you focus on getting things done in your job. It can also help you make friends, broaden your own knowledge of how things happen, and create a sense of social awareness.

Long term, it can translate into gaining a reputation for making things happen with each new success or completed project. With more being completed, you could earn more money and benefits from the company, as they will recognize the part you played in the process.

The 6 principles for persuasion

There are lots of schools of thought on persuasion research, but for some universal principles to get you started, we’ll look at the work of Robert Cialdini.

Regents' professor of psychology and distinguished graduate research professor at Arizona State University, Robert Cialdini, published six principles for persuasion in his book, “Influenced, The Psychology of Persuasion,” in 1984.

In an interview with the American Psychological Association, he explains these as the following:

(One study supported this finding that the certainty of being liked and consensual validation were strong connectors between people who didn’t know each other.) 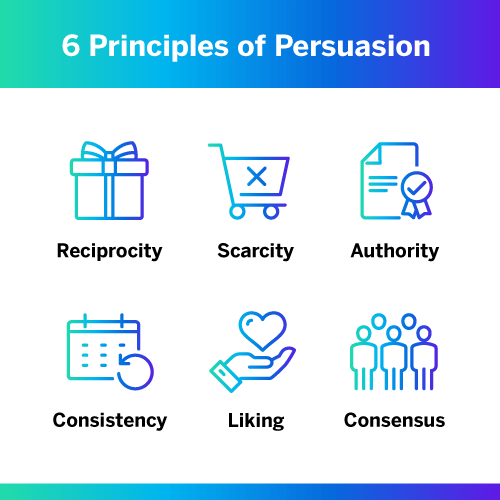 5 persuasive techniques to use at work

If we apply the Robert Cialdini principles to our work, day-to-day, they can be powerful tools when dealing with a customer or a colleague:

1) Use your power of persuasion to handle people kindly

Get other people to willingly want to do things to help you or to be involved with your idea. You can ‘attract more bees with honey, than with vinegar’, by respecting your peers and handling your interactions with them in a positive way.

One of the strategies for persuading another is done by using both verbal and non-verbal cues. Research says that between 60-70% of all human communication is non-verbal through body language. This means that if you meet someone for the first time, your mind is taking information from your senses (for example, what you see, what you hear, what you smell, etc.).

From this information, a person can make snap judgments about the other person, if there are similarities between the two people. This comes from an evolutionary safety principle where staying with your kind and in a large group provided the best chance of survival.

3) Align key messages so that you reach consensus faster

When people are negotiating and there are conflicting ideas, cognitive dissonance phenomena can occur. This psychological theory suggests that people wish to have a consistency of thinking, belief, and values.

When conflicting ideas occur and consistent thoughts are challenged, people have negative reactions like discomfort, which makes them want to find a way to get back to consistent thinking as soon as possible. They’ll be looking for something that is familiar to their consistent standards

In other words, if you want to influence people in a business setting, create key messages that account for the person’s beliefs, values, and thoughts so that you won’t conflict and they’ll be more likely to agree with you.

People will look to others in society to act as legitimate authorities so that they don’t have to make decisions of their own. This can save them energy and stress. In a business setting, this can mean acting like a leader in meetings and summarizing ideas in your own way, so that you’re shaping the viable choices and influencing the final decision.

5) Use the scarcity principle to give your idea higher value

Most people do want to get the ‘best’ deal, so when something is rare or limited, people will perceive it to be of higher value.

The scarcity principle can be used in a positive way to recommend your ideas and thoughts. For example, if your idea has a time limit attached to it (‘we have to move on it this week’) or if it provides a rare opportunity (‘We can capitalize on our product launch at the conference because it occurs on the same day’), it is seen as more desirable.

How to focus and improve your power of persuasion

It’s important to practice these techniques to see how they make a difference in your workplace. You might find that you’re more successful with your peers, but need to build up the confidence before pitching ideas to your manager.

That’s okay — your efforts now will have a lasting impact while you explore what makes sense for you to influence in your role. As Robert Cialdini says “even after complying, people are likely to feel positively toward the ...cause, and are more willing to comply with future requests.”

Something to also try, as you consider how you influence others, is how do other people influence you? Often, you’ll see the six principles by Robert Cialdini at work.

It could be an unsolicited piece of feedback, which prompts you to respond in kind. Your vice president might whet your appetite at the start of a strategy project, by appealing to your love of learning about strategies. You might get a discretionary pay rise, which makes you feel lucky to be working at the company.

Ask yourself 'What worked and what didn’t, and why?'

Meena is a content consultant, with a background in journalism and digital marketing. She is passionate about exploring storytelling and the customer journey in a customer-centric, digital world.

How to understand every employee’s journey across all touchpoints

What’s keeping employees from going back to open offices

How to build and develop inclusive teams

How Community Health Network is providing the best caregiver experience

Technology challenges in the workplace