Most people aren’t ready to go back to the office yet, but they’re feeling more confident returning to normal life

Leaders across the globe are faced with difficult decisions as COVID-19 surges in some areas and drops in others. While most organizations look at measures like new cases, hospitalizations, and testing rates, it is equally important to understand perceptions—how people feel. Taking action on these insights will have an important impact on the customer experience and employee experience of an organization.

In early May, Qualtrics asked thousands of Americans how they felt about venturing out into a world changed by a global pandemic. Did they feel confident going shopping again, attending a sporting event, eating at a restaurant, voting in a polling place — or returning to the office? Two months later we asked the same questions to see how things have changed.

Turns out, America is a little more ready to get back to its pre-pandemic habits than they were before. But their desks at work? Not so much.

In early July, Qualtrics asked thousands of workers in the United States, the United Kingdom, and Australia how they felt about the accidental work-from-home experiment. The majority, especially younger generations, realized they prefer remote work. But most want something a little more blended that allows them to be present for the most important moments — at the office and at home. This research has important implications

Most U.S. employees still don’t feel ready to get back to the office

In May, two out of three Americans (66%) said they would feel uncomfortable returning to the workplace. In early July, that number had only dropped by five percentage points to 61%. In fact, workers of all ages, from Boomers to Gen Z, felt equally uncomfortable with the idea of going back to the workplace — a finding that stayed consistent over two months.

But when they do return, workers expect their employers to take action and enact safety precautions.

Most employees around the world actually prefer working from home

In July, Qualtrics asked workers from the United States, the United Kingdom, and Australia how they felt about working from home and how work has changed since employees left their offices behind. While it turns out quarantine may not be everyone’s favorite activity, some are beginning to warm up to the idea of remote work.

Three out of five people who switched to remote work during the pandemic said they prefer working at home to working in an office. But that number changes drastically by age. 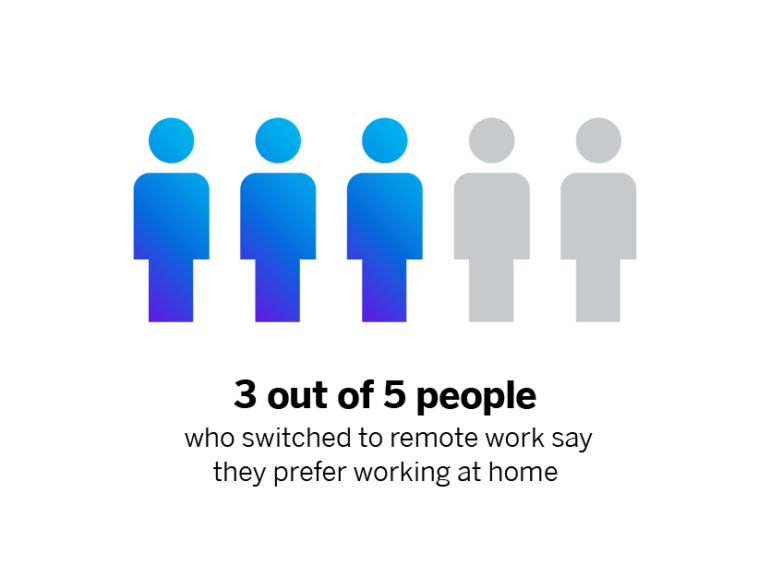 Kids had no effect on whether people prefer to work from home, but marital status did:

And despite some employers’ concerns, the vast majority (90%) say they are equally or more committed to their job than they were before they made the switch to working from home.

Employees prefer working from home more than the office, but they’d rather have both

Most employees prefer to be home, but they’d actually like to see something a little more blended:

87% of employees want to work from home either all the time, part of the time, or occasionally

The majority (65%) said their company has implemented new permanent remote work policies since COVID-19. Of those:

Of those whose companies have now said they can work from home permanently, 43% say they have already considered moving away from the city or state where they live. Almost one in five people (17%) have temporarily relocated because of the pandemic. Of those who have relocated: 30% said they would move if they could make their relocation permanent, and 50% said they would maybe move.

Some are already back in the office — and uncomfortable

Some people have already returned to their workplace, though more than one in three (38%) say they’re uncomfortable being back.

But why are those one in three people back in the workplace if they feel uncomfortable?

The number one thing that makes most employees feel uncomfortable being back in the office:

Childcare isn’t employees’ number one concern for feeling uncomfortable being back at the workplace, but only 61% said their childcare has reopened since the start of the pandemic. And only 52% are comfortable sending their child back to childcare.

The top five things employees said that would make them feel safer being back in the workplace are:

The pandemic became a global health crisis, but another crisis lurked beneath the surface: mental health. As people were forced to quarantine and work from home, and as the economy became less stable, the changes took a mental toll on many.

People in the U.S. are feeling a little more confident returning to businesses and other public spaces, but they’re still hesitant. In May, nearly half (48%) of Americans thought we would “never get back to normal.” That number has since dropped to 44%.

And though people feel significantly more comfortable doing things like eating at restaurants, attending religious services, voting at polling places, and shopping at retail stores than they did two months ago, there are still some activities that give them pause. Going to live concerts or sporting events and riding public transportation still make people the most nervous. 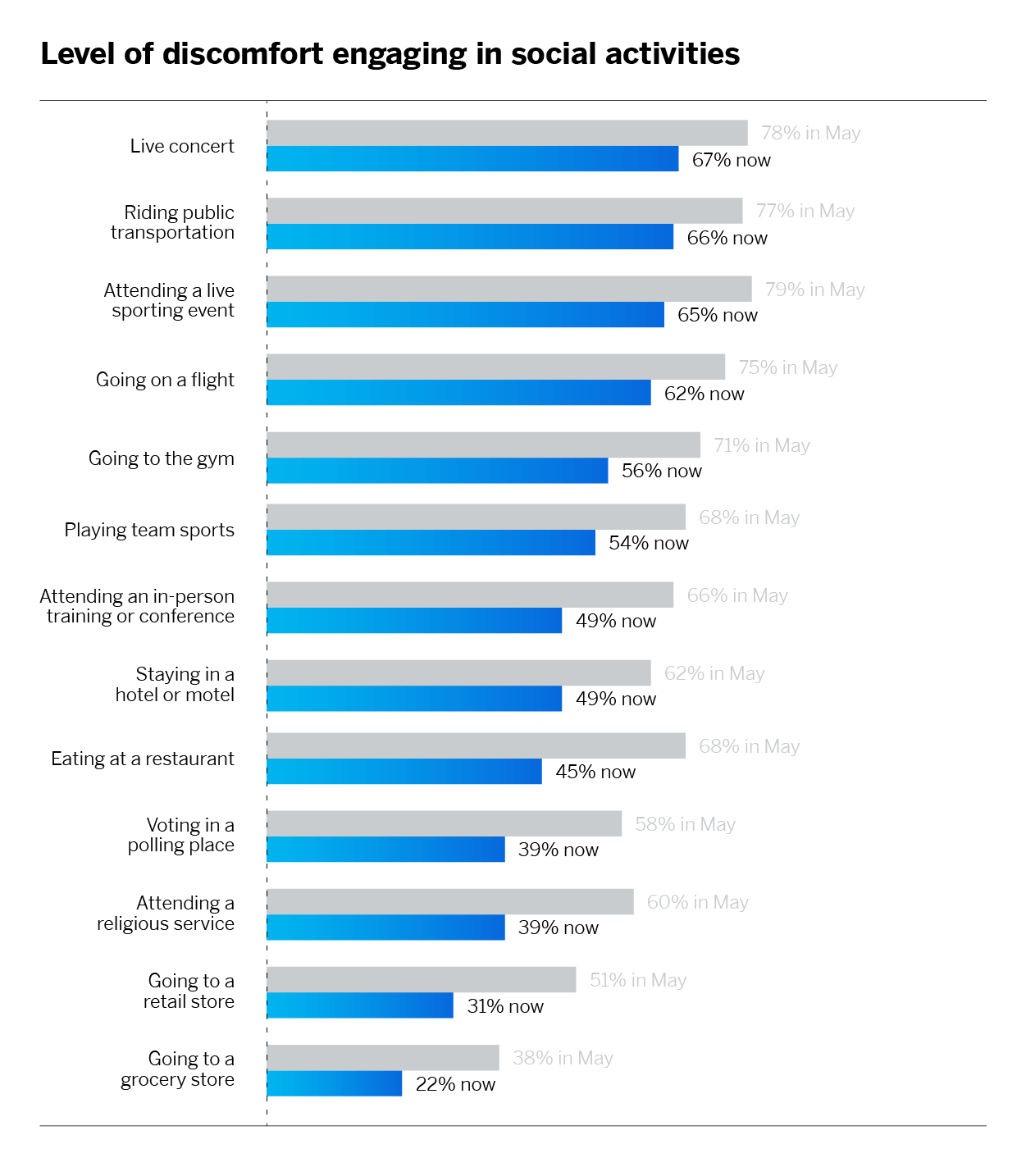 What would help people feel more comfortable getting back to business?

People feel most uncomfortable attending live events, though slightly less than they did in May. Of those who regularly attend live concerts, 23% say they are unlikely to return in the foreseeable future — compared to 26% in May. And 20% said the same about sporting events — compared to 24% in May.

But even after public health officials say it’s safe, people want to see a few other things happen before they feel comfortable attending a live concert, sporting event or conference. The top three safety measures people found most important in July are:

Many restaurants have, at least partially, reopened, and less than half (45%) of the respondents say they would feel uncomfortable eating at a restaurant now — compared to 68% in May. Only 13% say they’re unlikely to dine-in for the foreseeable future, while 16% said the same in May.

Even after public health officials say it’s safe, people want to see a few other things happen before they feel comfortable eating at a restaurant. The top five safety measures people found most important in July are:

Of those who said they regularly flew, 16% said they were unlikely to do so in the foreseeable future — compared to 20% in May.

Even after public health officials say it’s safe, people want to see a few other things happen before they feel comfortable flying or taking public transportation. The top four safety measures people found most important in July are:

In the U.S., as election season continues to move forward, significantly more people say they feel comfortable voting in a polling place than they did in May: 39% say they feel uncomfortable, while 60% said the same in May.

For public officials working to make in-person voting safe, research shows that after public health officials say it’s safe to do so, people will feel more comfortable in polling places with the following measures in place:

Returning to work and getting back to business

As leaders across the globe make difficult decisions to bring their employees back to work, change remote work policy, or reopen their businesses, they’ll want to consider how people have changed during the pandemic. How confident do people feel, have we learned anything about the way we prefer to work, and is it time to change?

It's time to work different - attend our free, virtual event to learn how

Liesl is a public relations analyst for Qualtrics, working to tell stories about data, as well as customer and employee success. She is an avid writer and recovering journalist.

What you need to know about review gating

3 steps to take on proactive outreach through social media

4 examples of negative tone of voice you should never use

6 customer signals that every product manager should listen to