How Impossible is driving the meatless revolution

From a pipe dream to a business valued at $7 billion — see how Impossible’s impressive trajectory from Silicon Valley science experiment to the leading non-meat burger brand is rooted in an intricate understanding of customer experience.

There once was a time when the vegetarians and vegans of the world had no options when it came to eating out — well, unless you count the side salad.

Now, you can’t throw a block of tofu without hitting a food store or restaurant that offers a variety of veggie and vegan products.

We are, without a doubt, in the age of ethical consumption. Across the globe, brands are constantly creating animal and cruelty-free alternatives to the foods we all love and enjoy — from eggs and bacon to ice cream and jelly.

Sustainability is the name of the game, and for almost every restaurant and grocery store, offering vegetarian and vegan options is more than just good business — it’s the right thing to do.

And interestingly, it feels like it’s happened almost overnight.

When did “veggie” and “vegan” options go from sad side to delicious main dish?

Okay, it’s not like history’s been without veggie and vegan options: the Chinese cultivated the wild soybean 3,000 years ago, and spent nearly 1,000 years developing its full nutritional potential.

It wasn’t until the 1960s that it began to emerge as a common food source in the West.

However, for many, the plant-based alternatives of the past were severely lacking. People had options, sure, but they simply didn’t meet  expectations nor recreate the experience. They’d complain about the texture of the soy-based or seitan-based burger, or its distinct lack of juiciness compared to the real thing.

It wasn’t until 2011 that the gears of the meatless revolution started to move at greater propensity. And at the front of the charge: Impossible Foods.

Impossible Foods wasn’t the first plant-based brand, nor will it be the last. But it did spearhead the meatless revolution by making the seemingly impossible… well, possible.

With the arrival of the Impossible Burger in 2016, for the first time, people could experience a burger that was frighteningly close to the real thing. Almost overnight, it changed how the world — and in particular, meat eaters — saw plant-based food.

But we’d be remiss for saying that it was just the burger that put Impossible on the map. No, it was far more than that, and the brand did it in such a nuanced, measured and strategic way that no-one saw it coming. Let’s take a look.

The burger is backed by spectacular science 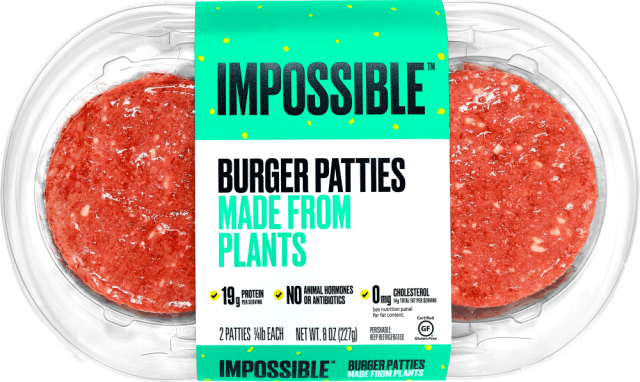 In 2011, plant-based options on the menu were a bit better than a salad, but probably still only stretched to a pasta dish. Impossible Foods took on the herculean task of creating a burger that could not only rival meat, but replace it entirely.

It took 5 years, but by the end, the Impossible burger launched tasting, looking, feeling, smelling and even bleeding like a real burger. The secret?

It’s based on heme, short for hemoglobin, a molecule that contains iron that can be found in animals and to a lesser extent, plants. It gives meat its signature “meaty” taste. Using synthetic biology, the company was able to recreate the flavor by using compounds from soy and yeast - hence, soy leghemoglobin (you’ll win at Scrabble with that one!).

The fact that the brand so passionately promoted the science of its creation helped to pique interest at a time when veggie burgers were usually a sorry mash of vegetables in a crumb coating. It naturally helped that it was founded by Patrick O. Brown, M.D., Ph.D., and professor emeritus of biochemistry at Stanford University. Impossible Foods’ creation had the creds to make it a scientific marvel, and even meat-eaters were curious to try.

The brand has lofty goals

As Impossible CEO Pat Brown declares, the business thinks it’s possible that no one will be eating animals by 2035 — in fact, the company says it is “dead serious” about it. 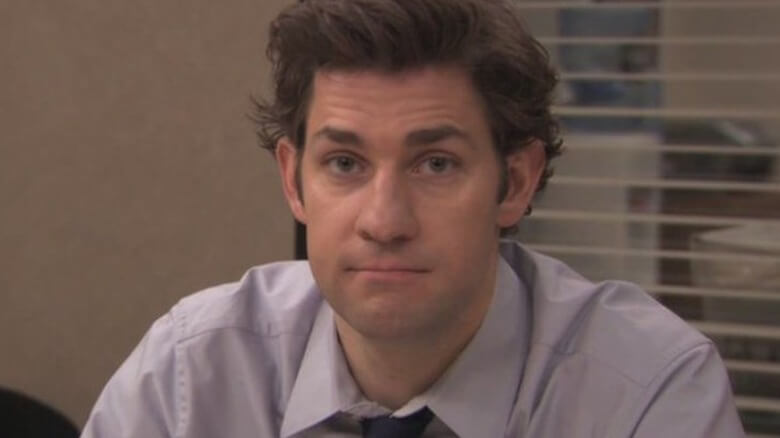 It’s an ambitious goal, but they’ve certainly got the statistics to back it up. Impossible’s report carried out with Quantis found that the Impossible Burger uses 96% less land, creates 89% less greenhouse gas, and uses 87% less water than beef from cows.

Also, the company isn’t shy about its aims to reduce our impact on the climate, having built the entire product around saving the environment.

Focusing on this aspect, rather than the choice to eat meat or not, has saved consumers from feeling as though they’re taking a stand on that particular debate, but helps them feel good about helping the world.

At the same time, Impossible Foods is broadening its scope to become more than just a brand that sells a product (and a great one at that) to one that sells an experience. Notice how the brand has already dropped the “Foods” from its name — obviously, the company is still called Impossible Foods, but from a branding perspective it’s all about IMPOSSIBLE.

Just look at the likes of Apple — it dropped “Computer” from its branding to become just Apple. What it signals to customers and represents for the business is a shift away from just delivering a product (the computer) to providing an Apple experience.

Here’s another one — Starbucks. It dropped “Coffee” from its branding to become just Starbucks. It’s not just about coffee now, but the overall Starbucks experience, products and all.

So for Impossible, this shift away from “Foods” highlights how the brand is diversifying and refocusing its approach to deliver a more holistic experience through the products it provides.

Impossible Foods hasn’t had your typical food business journey. It’s a Silicon Valley startup, and as such has foregone the usual started-as-a-food-stand, mom-and-pop-restaurant-turned-chain, or celeb-chef-launch trajectory.

Rather than aim directly at consumers, the brand used its small production to its advantage, launching exclusively at certain big-name locations to drum up interest. The burger was launched at the famous Momofuku Nishi in New York, owned by renowned meat advocate David Chang, in mid-2016. Soon, restaurants Jardinière and Cockscomb in San Francisco, as well as Crossroads Kitchen in Los Angeles, added the burger to their menus.

Just 6 months later, it hit the tables of the Michelin-starred Public.

This approach generated a huge amount of press attention, and subsequently the interest of the public. Getting your soon-to-be-greasy hands on the burger seemed impossible — so when it launched as a retail product, it was instantly popular.

“Using food service as a platform to spread the word and spread awareness was a very powerful tool - the chefs became ambassadors of our brand,” the brand’s director of expansion, Jordan Sadowsky, told The Drum.

“If you start in retail right away, you have to really fight against all the competition. We had a product that was good enough that chefs wanted it. They promoted it along with us.”

This method of brand exposure and limited availability drove up demand at the same time as building authenticity, borrowing market credibility by aiming straight for the hardest foodies to please: chefs. Even without a physical presence, the brand was known the world over.

Perhaps Impossible Foods’ greatest feat is that it managed to sell a lifestyle change without making its target audience feel bad about choosing it.

Rather than demonizing meat consumption, its approach was to make an alternative an easily accessible curiosity. The burger is seen more as a wonder of science (and a tasty dish) rather than a comment on why giving up meat is the “better” way, and this resonated with audiences.

Impossible Foods’ advertising — which it only launched in 2021, by the way — actually labeled the Impossible burger as meat. “We are Meat” turned the concept of a plant-based burger on its head, aiming not for the already-converted, but for the wider, meat-eating masses.

It was a bold strategy, but by side-stepping the stigma, Impossible Foods have nudged into the meat market, accessing millions of potential buyers who would usually avoid hipster-seeming alternatives. It's focused on the sensory experience of the dish, rather than what it actually signifies.

Taking advantage of familiarity has helped, too. Partnering with Burger King to create the Impossible Whopper has meant that trying a meat-free burger is as easy as walking into your local takeout joint. Not only that, but people trust Burger King and know it well — it’s been around since the fifties, after all — and that lends immense credence to the product’s quality.

The result: a brand anyone can get behind

The humble veggie burger has come a long way. The Impossible Burger has made a meat-free reality seem a little more probable.

Other brands looking for the same meteoric journey might wonder how they can replicate the cult-like status the brand now holds. When it comes down to it, Impossible has kept its recipe simple: an evidence-based product, authority-led hype, and a mission everyone can get their teeth into. Delicious.

Explore why brands like Impossible, Costco, Fenty, and Patagonia have won customers’ hearts in each episode of the Irreverent docu-series. Learn about the future of the workplace in Work: New.0, and hear in creators’ own words how they’re bringing human experience into a new age. 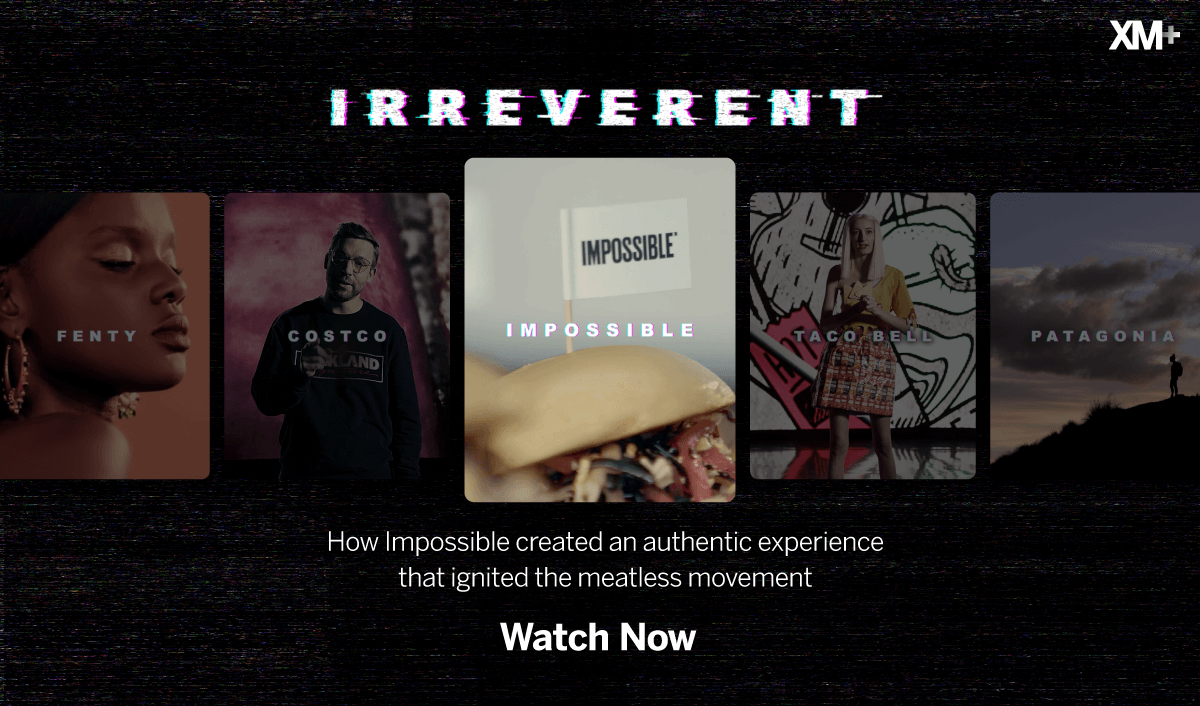