The 4-step process to improve usability of web surveys

Are your surveys designed to be invisible? They should be - the less a respondent has to think about your survey, the more likely they are to complete it. Here's what you need to know to design studies that will improve data quality and reduce respondent burden.

As research professionals, we need to be conscious of the relationship between design and usability when creating research studies. More often than not, poorly designed research is unintentional and can occur when aesthetics are placed higher than usability — like designing a survey that matches your brand’s colors, but requires a lot of effort to navigate. To help avoid this, researchers should focus more on how to design studies that will improve data quality and reduce respondent burden.

It’s important to realize that people won’t always use designs the way they were intended to be used. This usually occurs because the user’s goals are different from the designer’s goals. Respondents are generally going to take the shortest path possible to complete what’s needed and researchers need to design surveys toward that goal.

Don Norman sums it up nicely, “Good design is harder to notice than poor design, in part because good designs fit our needs so well that the design is invisible.” The goal is for respondents not to have to think about how to complete a study.

So how do we create invisible designs?

Say what you mean, mean what you say

When designing research, it’s important to keep in mind that people don’t read, they scan. A website usability study by the Nielsen Norman Group found that 79% of users scanned web pages and only 16% read every word. Surveys are not websites, of course, but there’s some evidence that users treat text-heavy surveys in the same way.

Text scanning is more common than we think. Respondents often read only what they think they need to answer the question. By carefully choosing the wording used, researchers can ensure they will obtain the desired information needed to complete the study. One easy way to do this is to revise questions for brevity without sacrificing clarity. 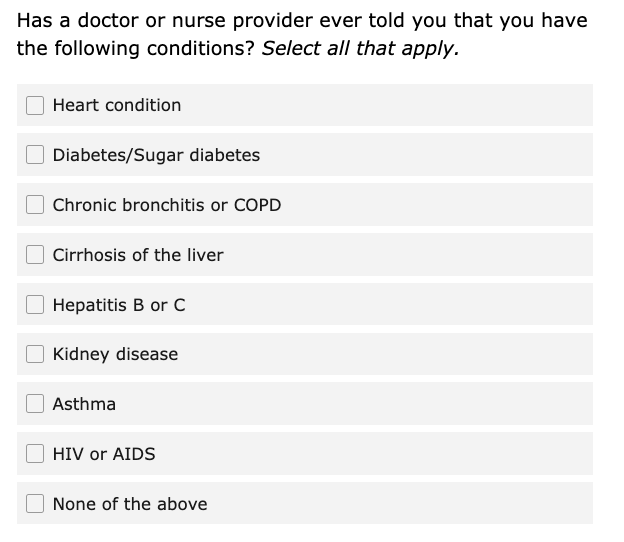 Let’s take for example the question below, this question has three lines of text and the last two lines are the instructions. Knowing that people skim, it’s going to be hard for them to find the question – and to know what they are supposed to be answering. Using visual clues instead of words can also help convey question meaning. There are two ways to do this in your surveys. One way is using different formatting for question text, instructions, response options. Research suggests that people are less likely to read text in italics, so having the question in a regular font and the instructions in italics can indicate to the respondents where to find crucial information. The other way to do this is by using visual cues to emphasize what is needed. For example, many people associate radio buttons with “select one” and checkboxes with “select all.” By using checkboxes, many people will automatically know that the question is a “select all that apply” without having to read or think.

Other visual cues you can use:

Simplifying the task for respondents can yield more accurate results. If the task is too complex, simply adding more instructions is not going to help. One way to do this is by breaking the question into multiple parts such that each question is asking about one simple construct. Remember, respondent burden is not determined just by the number of questions, but also by the complexity of the questions. A 10 question survey with simple, straightforward questions will be perceived as easier than a 5 question survey that’s complex or confusing.

Simple design also extends to cognitive simplicity. When people answer survey questions, they often use shortcuts like anchoring and adjusting. For example, they may think something is “slightly worse than average” or that “it’s not the best thing but it’s pretty good.” So a person will then pick the category just below the middle to mean “a little worse than average” or the second-to-top category to mean “Good, but not the best.” However, when the visual midpoint is different from the conceptual midpoint, it can lead to bias. 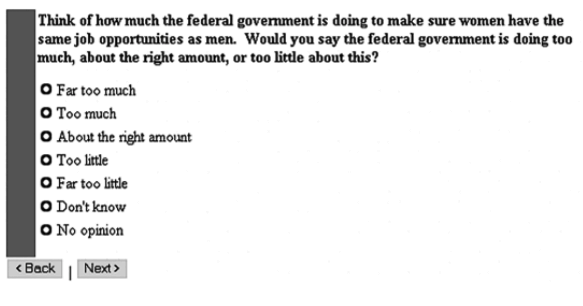 To align the conceptual midpoint and the visual midpoint, add a line or space between the scaled response choices (e.g., very good to very bad) and any non-substantive options (e.g., Don’t Know or Not sure). 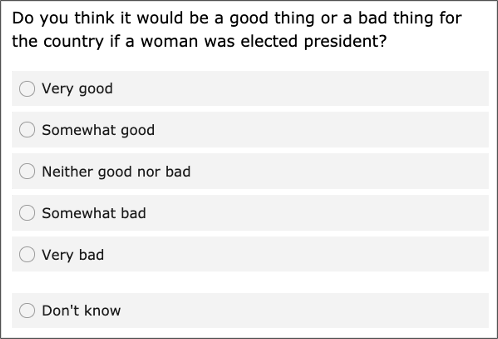 Although most of my advice is based on research with US populations, usability research suggests that many fundamental principles hold true across most countries. For example, in the US, we read from left to right, and so when people scan we see that F-shaped pattern. In countries that use Arabic, they read from right to left so the scanning properties are consistent, it is just the mirror image of an F-shaped pattern.

This specific finding is from a paper survey, but it’s relevant for showing how cultural differences affect visual design. The form was designed in English, but they also needed an Arabic version. So they designed the survey form to fit Arabic culturally. However, it turned out that it still was not usable.

While the individual boxes for letters worked for languages with print letters, it did not work in Arabic, which uses script. The individual boxes had to be replaced by open text boxes so that people could enter their names correctly. While many aspects of usability are the same in other cultures, it is important to conduct user testing before fielding a survey. There are going to be differences in how people from different countries use certain web features too. Conventions that exist in one culture might not in another.

As researchers, we’re tasked with anticipating how people interact with our studies and making sure we’ve taken the right actions to simplify the experience and maximize accuracy. Every strong design is rooted in easing the process for respondents — and how we act on that belief is the difference between a successful design and a poor one.

Get our detailed handbook of survey question design

Statistical analysis software: your complete guide to getting started

Defining a new era of feedback

What skills should market researchers focus on in 2022?