As the war in Ukraine unfolded last week, emotional reactions resounded around the world. But what did those reactions look like in aggregate, did they change as the crisis unfolded and what topics generated the most intense emotions? To answer these questions, Qualtrics analysts used XM Discover, its natural language processing and listening tool, to filter and analyze more than 200,000 Twitter posts about the invasion of Ukraine to understand the most emotions of people around the globe as they took in the headlines. The results reveal an intense global emotional response to the human toll of the conflict, along with economic worries about the impact of sanctions globally.

As the news unfolded from Feb 28 through March 6, emotions around the world evolved from anger and frustration to fear and confusion, and initial hopefulness gave way to sadness, according to the research.

“We’ve never entered into a war with so much real-time information about how people around the world are feeling,” said Nicole Martin, the researcher who led the analysis. “This technology gives us insight into rapidly shifting emotions as a crisis unfolds. The fickle nature of social media provides a clear understanding of how consumers digest breaking new stories and anticipate how they’ll be impacted.”

Nations across the globe provided increased relief and support to Ukraine, increasing the amount of kindness and hope expressed across social media. The XM Discover measured the full range of each emotion expressed. For example, within kindness and hope conversations, individuals also discussed their hopelessness amidst the growing conflict. 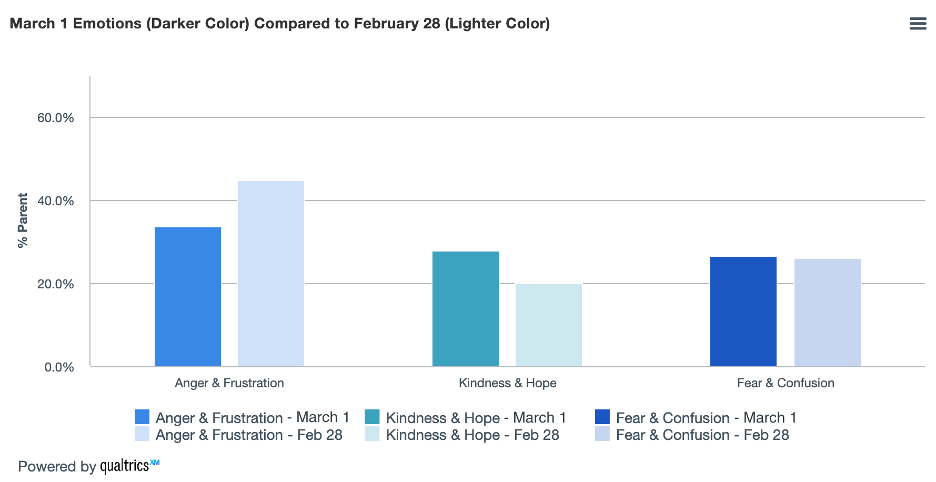 Figure 2: For each of the top 3 emotions expressed (Anger & Frustration, Kindness & Hope, Fear & Confusion), the left bar displays prevalence of that emotion on March 1 compared to the right bar, which represents the prevalence on Feb 28.

In conversations about solidarity with Ukraine and frustration with Putin’s actions, we simultaneously discovered highly emotionally charged topics related to economic concerns. Individuals discussed the impact of sanctions on the Russian economy, combined with stock market concerns and rising inflation. 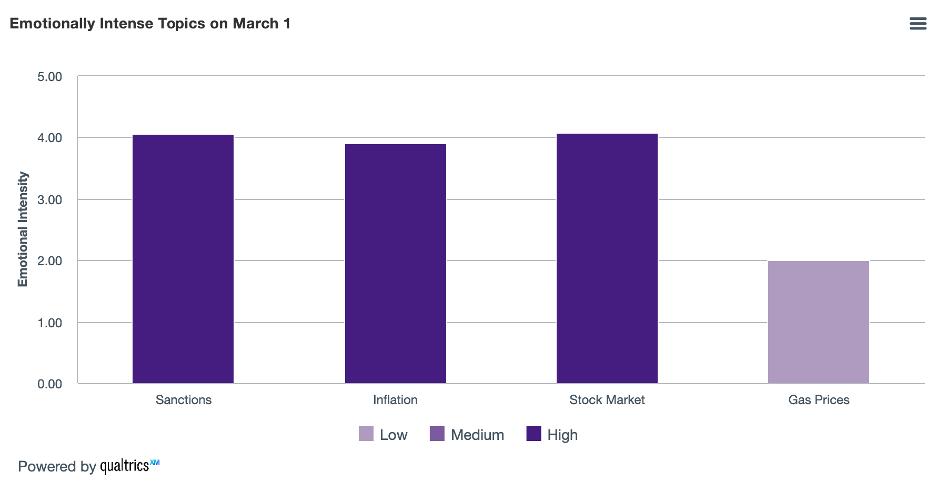 Notable growth in emotionally charged rhetoric occurred through conversations about gas prices and refugees. Within these conversations, we found polarizing opinions amid simultaneous economic concerns. As the week went on, emotions shifted toward more anger and frustration with the invasion and corresponding damage to the rest of the world. 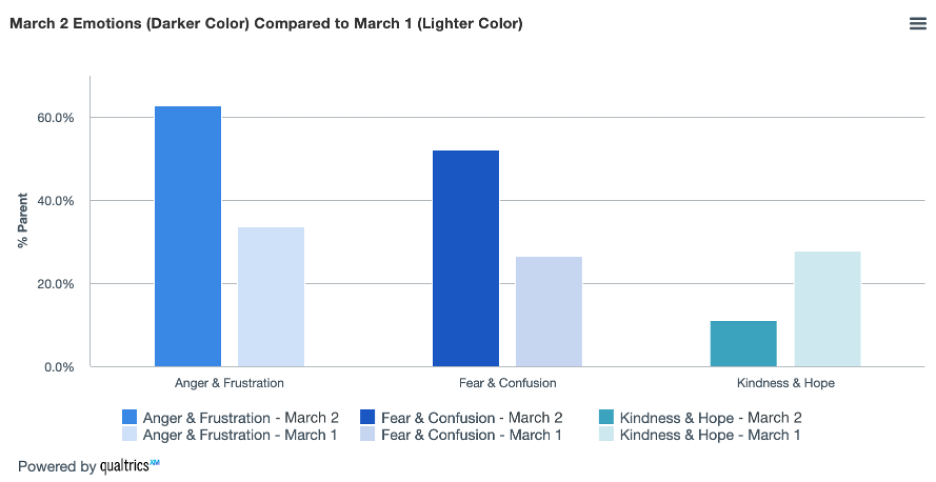 Figure 4: For each of the top 3 emotions expressed (Anger & Frustration, Kindness & Hope, Fear & Confusion), the left bar displays prevalence of that emotion on March 2 compared to the right bar, which represents the prevalence on March 1. 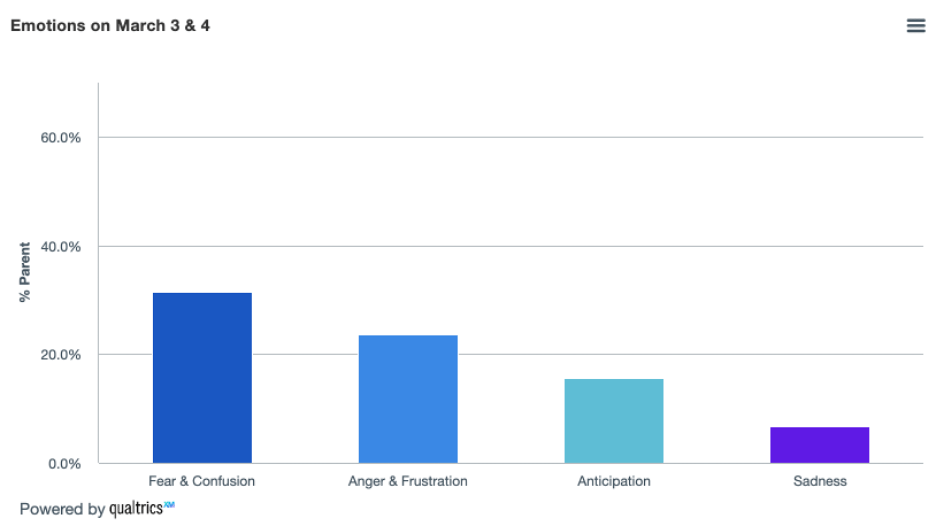 Figure 5: For each of the top 3 emotions expressed (Anger & Frustration, Kindness & Hope, Fear & Confusion), the left bar displays prevalence of that emotion on March 3 & 4.

On Sunday, March 6, more than 1.5 million refugees had fled Ukraine. General frustration with the Russian invasion, policies towards refugees, and economic repercussions drove further growth in anger and frustration. What’s more, growing refugee numbers led to questions about COVID-19 spread and policies to address mass migration amidst the two-year pandemic. 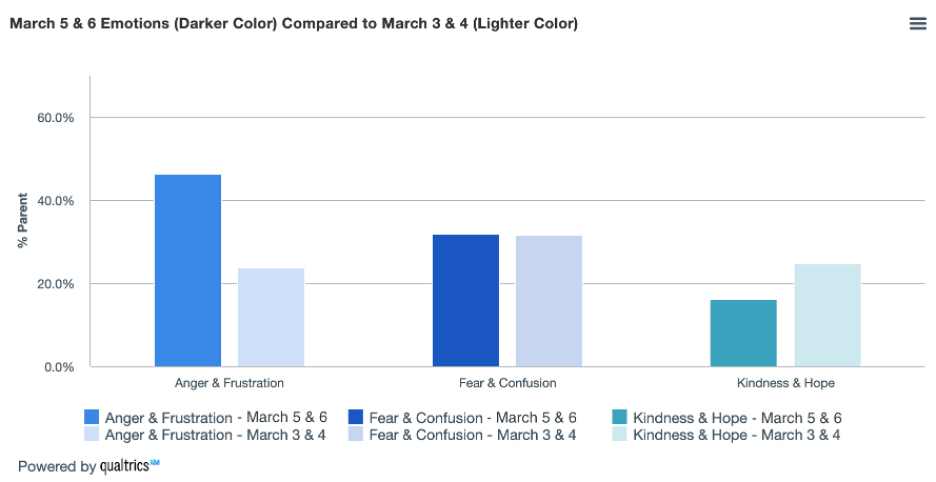 Figure 6: For each of the top 3 emotions expressed (Anger & Frustration, Kindness & Hope, Fear & Confusion), the left bar displays prevalence of that emotion on March 5 & 6 compared to the right bar, which represents the prevalence on March 3 & 4. 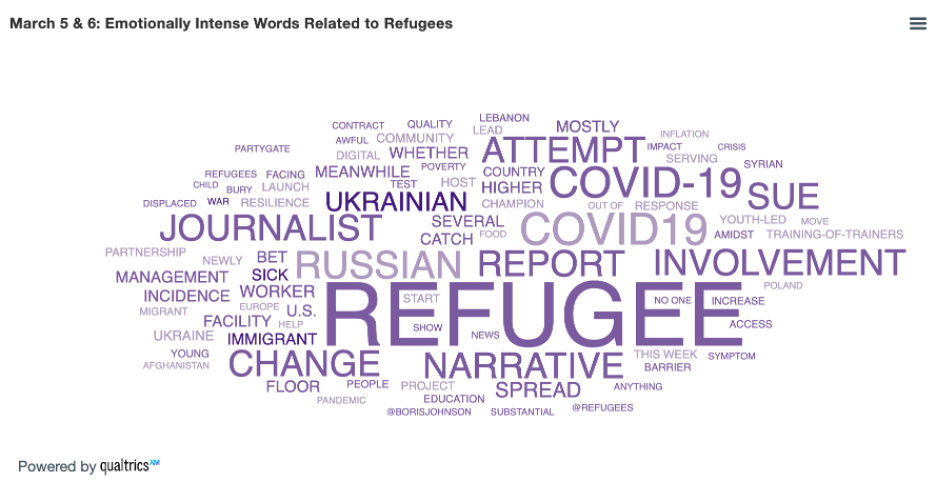 How We Did It – The Methodology

XM Discover captures emotions through our natural language understanding (NLU) by analyzing unstructured data and extracting meaning at scale, helping us understand how people experience major events in near real-time. By analyzing more than 200,000 tweets posted publicly on Twitter, XM Discover analyzed the language within these tweets to identify emotions and related themes. Emotions are identified by an individual’s language, such as an individual staying, “as unsure as I feel.” XM Discover can tag that tweet as expressing “fear and confusion.” From there, we aggregated those tweets, assigned them meaning, and produced a digestible snapshot of the public reaction. XM Discover’s ability to sort through social media data and isolate emotions provides deeper context regarding the impact of the invasion of Ukraine on the global population. As the situation develops, we will continue to monitor the public’s reaction to provide insight into how current events shape global perspectives.

Transforming the work experience at Qualtrics