Setting a Creative & a Target

The first thing you should do in your intercept is select a creative. For your very first project, select the creative you made in Step 3. 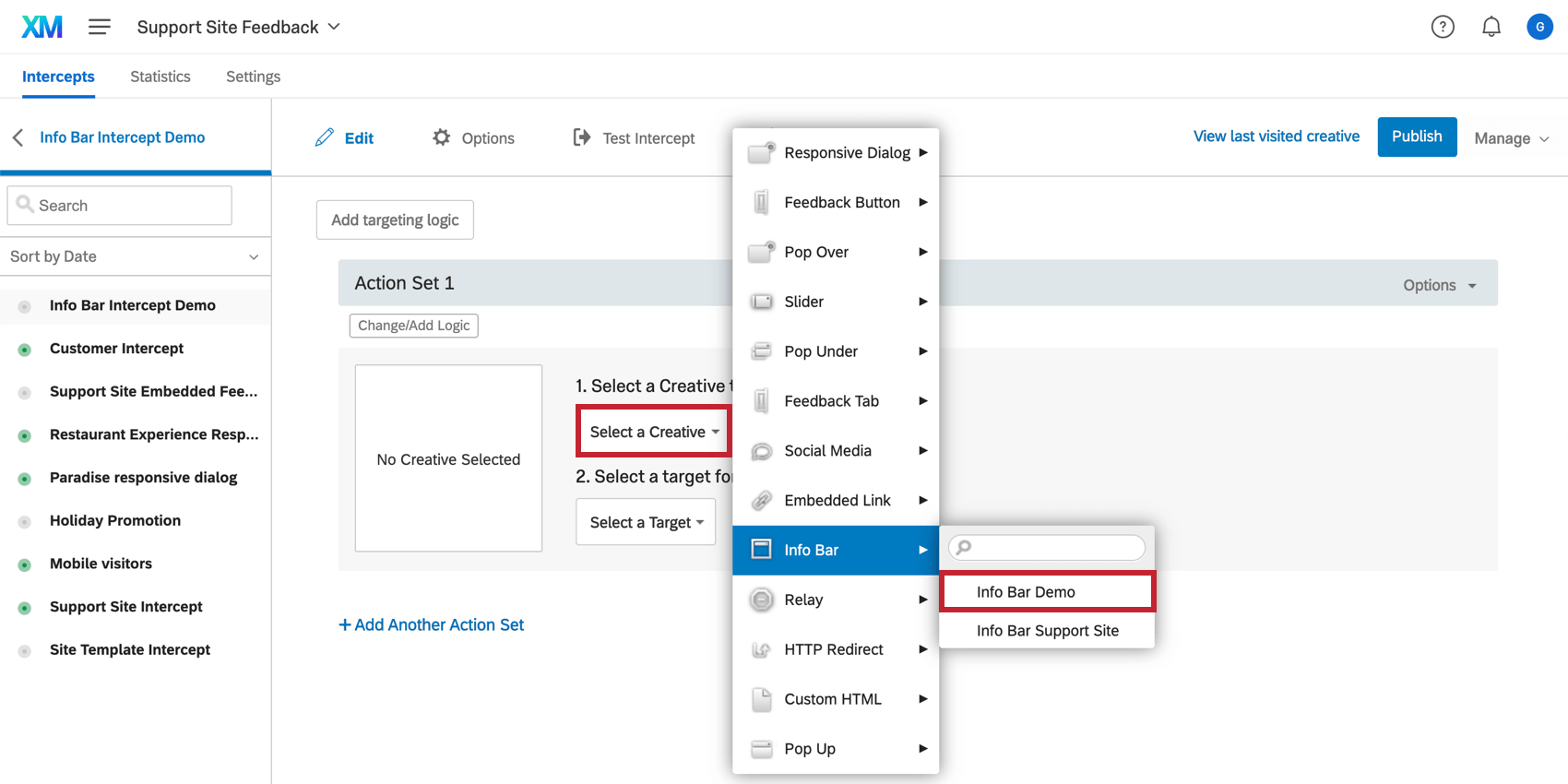 Now it’s time to decide what your creative’s target should be. Select a target by typing or pasting a URL in the field. If you followed Step 1 and made a Qualtrics survey, then paste the anonymous link of your targeted survey in the field. You also have the option to directly select your Qualtrics survey. 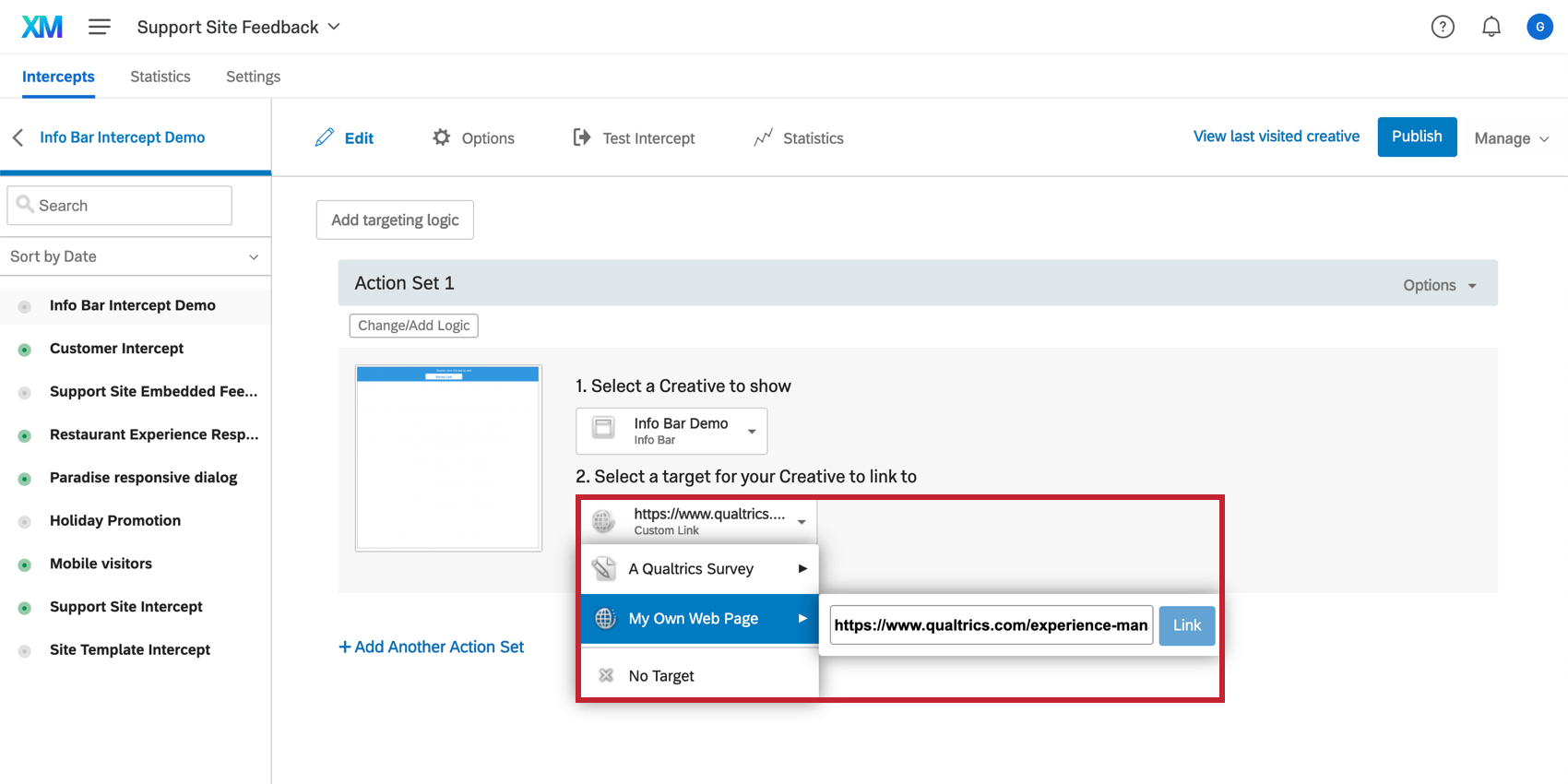 Intercepts allow you to define the logic that need to be met in order for the selected creative to display to visitors. Logic can be applied at the level of an entire intercept, or individual action sets within an intercept.

Logic can be based on a number of conditions, including: 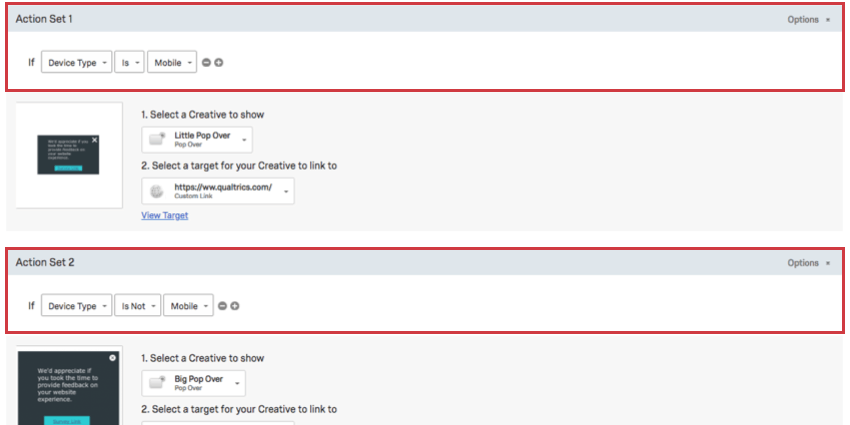 Qtip: This is not necessary if you use the responsive dialog or feedback button creatives, which can be translated without the creation of additional action sets. See Translating Feedback Buttons & Responsive Dialogs for more details.

Qtip: For more information on when you’d use more than one action set and how to set them up, see the Multiple Action Sets support page.

Think on a deeper level how you want all the action sets in your intercept to behave. Would you like to weight some over the others? Randomize them? Do you want to make sure the intercept doesn’t appear more than once? Intercept Options allow you to set up all these functions and more.

One vs. Multiple Intercepts

Many times, people choose to organize by how their website is set up. So you may have an intercept just for feedback on the support site and another intercept for main site feedback.

Essentially, the less involved multiple action sets (and their corresponding creatives and targets) are with each other, the less likely you need to combine them into one intercept.

The embedded link allows you to place a link on your website that will direct visitors to different destinations depending on criteria you set. This can be useful for A/B testing. For example, you could send 50% of your visitors to a different version of your page in order to determine which layout or version converts more customers. Or for promotional material, you could link visitors from certain geographic regions to special landing pages specific to those regions.

Creating multiple action sets in your intercept can help you create a more dynamic web experience for your visitors. For example, maybe you want to conduct A/B testing. Maybe you have different creatives that appear under different conditions, or you want to target a particular type of visitor with your creatives. Multiple actions can help you with all these situations and more.

In the Editing Intercepts support page, we learned the basics of adding logic to an action set. On this page, you'll learn how to work with multiple logic statements. You will also learn the difference between targeting logic and action logic, and how to add multiple exclusions to your intercept.

Once you’ve built a creative, the next step is to set conditions for when it will display and what the targets on your creative should be linking to. This is where the intercept comes in. Intercepts manage when your creatives appear and where they link to.

With a Pop Under Creative, you have the unique ability to target visitors after they leave your website. The Pop Under is particularly well suited for site exit surveys, shopping cart abandonment targeting, and any other project where you want to target those leaving your website.

Now it's time to start thinking about what kind of visual you want to use to capture your visitors' attention, and how you want it to behave. Do you want messages to glide over the screen, or appear suddenly? Do you want a little tab people can choose to click on or ignore, or a big image that pops up to steal their attention? These visuals you'll be using to 'intercept' your visitors are called creatives.