In your Survey Flow, you can choose when and in what order the questions in your survey appear. By organizing your questions into blocks, you can use your survey flow to design a survey that displays exactly what you want when you want it. 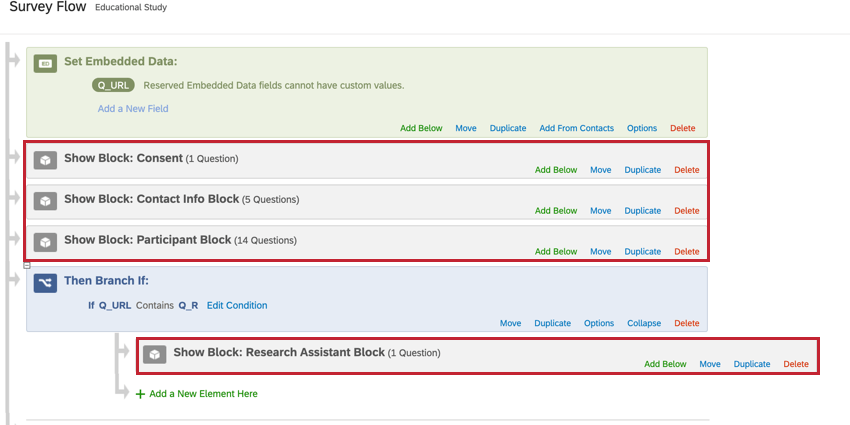 Blocks are used to group and organize the questions in your survey. You can think of blocks like chapters in a book; each one has its own content, and together they form one cohesive story. The same can be said for your question blocks; they come together to form your survey. Every survey will have at least one question block. To learn more about creating and managing blocks, see Block Options.

Typically, questions are separated into blocks for the purpose of conditionally displaying an entire block of questions, or for randomly presenting blocks of questions. These branching and randomization options are found in the Survey Flow.

Example: In academic research, you might have two sets of questions: one for a control group of participants and one for an experimental group. Rather than creating two surveys, you could create two blocks of questions within one survey and randomly assign participants to one block or the other.

Adding a Block to Your Survey Flow

It’s okay to have the same block appear multiple times in your survey flow, but the questions will only appear once in your results. If the respondent sees the same block a second time a survey, they’ll see—and be able to modify—their previous responses. While not common, this can be useful in some situations, such as having the respondent double-check their contact information before submitting their response. However in most situations, you will duplicate a block as a way to have it show in separate branches in the survey flow, not as a way to show the same questions twice.

Qtip: Showing the same block multiple times in the survey flow is different from copying a block in your survey editor. Copied blocks are separate from each other (the same as having two different blocks), and the questions from each block show up separately in your results.

To duplicate a block in your survey flow, click the Duplicate option. You can then move the block to where you want it to appear in your flow. 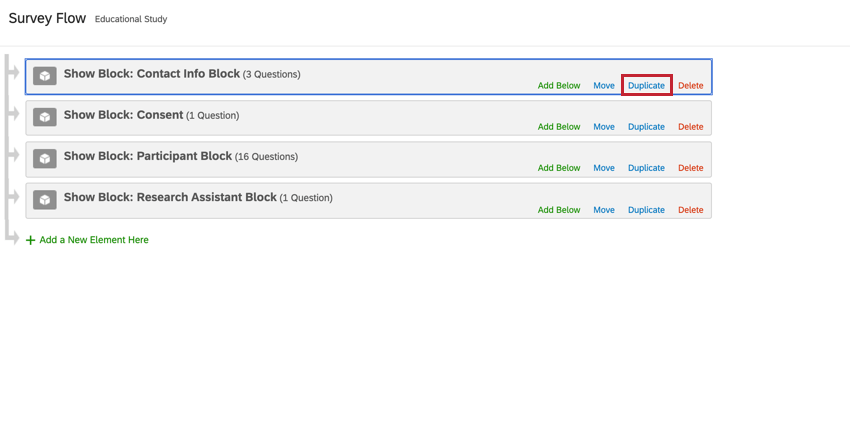 Check out the following use-cases on using the same block multiple times in your survey flow.