About Regression and Relative Importance

Regression shows you how multiple input variables together impact an output variable. For example, if both the inputs “Years as a customer” and “Company size” are correlated with the output “Satisfaction” and with each other, you might use regression to figure out which of the two inputs was more important to creating “Satisfaction.”

You can find instructions below on how to set up a regression in Stats iQ. For more guidance on thinking through the analytical parts of regression analysis, please see the following pages:

Qtip: There are now helpful tooltips in the Stats iQ platform! While working in Stats iQ, you can click the i icons that appear throughout the platform in order to bring up additional information and definitions.

Qtip: You may have up to 750 cards in your workspace. If you reach this limit, an error will appear when you try to create a new card, warning you that your oldest cards will be deleted.

Creating a regression card will allow you to understand how the value of one variable in your data set is impacted by the values of others.

Things to consider when selecting variables for regression:

If you have a large number of variables you’d like to include in an analysis, consider the following approaches:

Once you have selected your variables, click Advanced and then select Regression to run a regression.

Qtip: At the top of the regression card will be a green (and sometimes red) line. If you click on it, you will see the amount of responses marked as “Included” or “Missing” for that specific card. Only respondents who answered the question for every single question or data point used in the regression analysis will be marked as “Included” and used in the analysis. Otherwise, their response(s) will be marked as “Missing.”

More specifically, the types of regression that Stats iQ will run are as follows:

Relative importance is combined with Ordinary Least Squares (OLS). The output comes from a combination of the two analyses:

Logistic regression is a binary classification method that is used for understanding the drivers of a binary (e.g. Yes or No) outcome given a set of input variables. If you run a regression on an output variable with more than two groups, Stats iQ will select one group and bucket the others together so as to make it a binary regression (you can change which group is being analyzed after running the regression).

Relative Importance (specifically Johnson’s Relative Weights) does not suffer from this problem and will adequately balance the importance of the input variables, regardless of what type of regression is being run.  It also calculates each variable’s relative weight (or relative importance), the proportion of explainable variation in the output due to that variable. This is shown as a series of percentages that add to 100%.

It returns results similar to running a series of regressions, one for each variation of the input variables. For example, if you had two variables, it would do the equivalent of running three regressions: one with Variable A, one with Variable B, and one with both. This allows it to quantify each variable’s importance and apply that quantification back to the regression result.

Qtip: If you’re familiar with dominance analysis, this is an extension of Shapley regression that is a more computationally efficient approximation of dominance analysis.
Qtip: Based on the above example, your results can be reported as “46% of what the model tells us about NPS can be attributed to the Age of the respondent.”

When you run a regression in Stats iQ, the analysis results contain the following sections:

At the top of the card is a summary for the regression analysis. Looking at the chosen variables, this written summary explains which variables are the primary vs. secondary drivers as well as drivers that had low cumulative impact. The data table includes the Sample Size and R-squared value.

For linear regression, click Analyze OLS regression diagnostics and residuals to improve your model below the key/output variable to view the Predicted vs Actual and Residuals plots. See Interpreting Residual Plots to Improve Your Regression for more information.

Once you have created a regression card, you can add additional variables to the analysis by following the below steps:

To remove a variable from the regression, hover over the desired variable and click the blue X on the far-right side of the table. After choosing variables to add or remove, make sure to select “Apply” to run the new model.

When running a regression analysis in Stats iQ, you may find that you need to improve your model. The most common way to improve a model is to transform one or more variables, usually using a “log” or other functional transformation.

Transforming a variable changes the shape of its distribution. In general, regression models work better with more symmetrical, bell-shaped distributions. Try different kinds of transformations until you find one that gives you this type of distribution.

Qtip: It may not be possible to find a transformation that results in a symmetrical distribution.

To transform a variable:

The following transformations are available in Stats iQ:

By far the most common transformation is log(x). It transforms a “power” distribution (like city population size) that has many smaller values and a small number of larger values into a bell-shaped “normal distribution” (like height) where most values are clustered towards the middle.

Use log(x+1) if the variable being transformed has some values of zero, since log(x) cannot be calculated when x is zero.

For more details on when to transform your variables, please see Interpreting Residual Plots to Improve Your Linear Regression

Relative Importance combined with Ordinary Least Squares is the default output for a linear regression. However, there are other options available.

Once you’ve selected M-estimation, Ordinary Least Squares, or Ridge Regression, you’ll be able to see the output. The output will appear below the Regression Methods section. 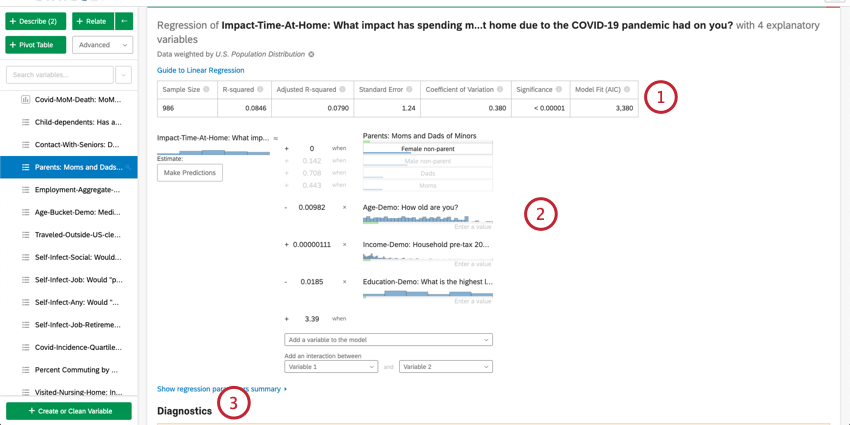 Example: In the below example, we’re trying to predict customer NPS based on a few input variables. After selecting values for the input variables, we can see an estimated NPS score of 4.98. 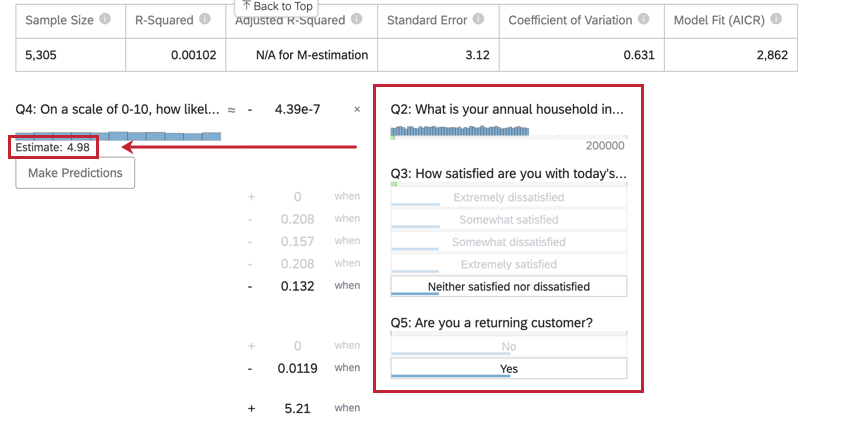 Usually, you’ll use regression analysis in Stats iQ to understand the relationship between input variables and output variables. However, once a regression model is created, it can also be used to predict the output value for rows of data where you have values for the inputs.

This functionality is only available in Ordinary Least Squares, M-Estimation, and Ridge Regression.

You can achieve the same effect for categorical variables in a Relative Importance analysis by creating a new variable that combines the two. For example, you might combine the variable Color (with red and green groups) with Size (with big and small groups) to make a variable called ColorSize (with groups BigRed, BigGreen, SmallRed, and SmallGreen).

Multicollinearity occurs in a regression context when two or more of the input variables are highly correlated with each other.

When two variables are highly correlated, the mathematics for the regression generally puts as much value as possible into one variable and not the other. This is manifested in a larger coefficient for that variable. But if the model is changed even a small amount (by adding a filter, for example), then the variable where most of the value was placed can change. This means that even a small change can have a drastic effect on the regression model.

Relative Importance analysis handles this issue so you don’t have to worry about it. If you prefer to use one of the other methods and your model has this issue, the presence of multicollinearity (measured by “Variance Inflation Factor”) will trigger a warning and suggest that you remove a variable or combine variables by averaging them, for example.

Stats iQ will warn you when there are potential issues with your regression results. These include the following situations: