Qualtrics will assign a Very Negative, Negative, Neutral, Positive, Very positive or Mixed sentiment to a text response as soon as it is loaded in Text iQ. This sentiment is based off of the language in the response, the question text itself, and edits you’ve made to your sentiment analysis. The Text iQ model is trained on a large and diverse set of real experience data to substantially increase classification quality and minimize uncertainties when the sentiment is not expressed as strongly. Once assigned, each sentiment comes with a numeric score, the sentiment score.

Qualtrics’ sentiment analysis is constantly improving. Our analysis tool periodically runs a batch analysis on all manual corrections made by users to improve the accuracy of the model, assess improvements, and correct mistakes that Text iQ is making in sentiment identification. The Very Negative and Very Positive sentiment labels have been implemented to indicate the strongest sentiment, helping you to focus on the most critical feedback in each comment.

These sentiment measures can be used to filter your data or be displayed in visualizations in the Reports tab.

Qtip: Sentiment Analysis is only available to Advanced Text clients.
Qtip: If you would like to branch based on a sentiment or topic in your Text iQ analysis, see Text iQ-Powered Survey Flows.

This model also now takes sentiment edits into account in order to learn how to better assign sentiments in the future. However, please note that these edits do not immediately affect the sentiment assignment of projects in your account. Instead, these edits are periodically analyzed across all Qualtrics users and used to improve the sentiment analysis model as a whole.

Qtip: You can edit both the Overall Sentiment and the Topic Sentiments for your responses. Read the Viewing and Changing Sentiment section for more information.
Example: Let’s say you receive a survey response that reads, “The service and the food were excellent, but everything was very overpriced.” If this response is tagged with the topics Service, Food, and Price, then the Topic Sentiments of each topic are Service=Positive, Food=Positive, Price=Negative. The Overall Sentiment is Positive as the response was mostly Positive. 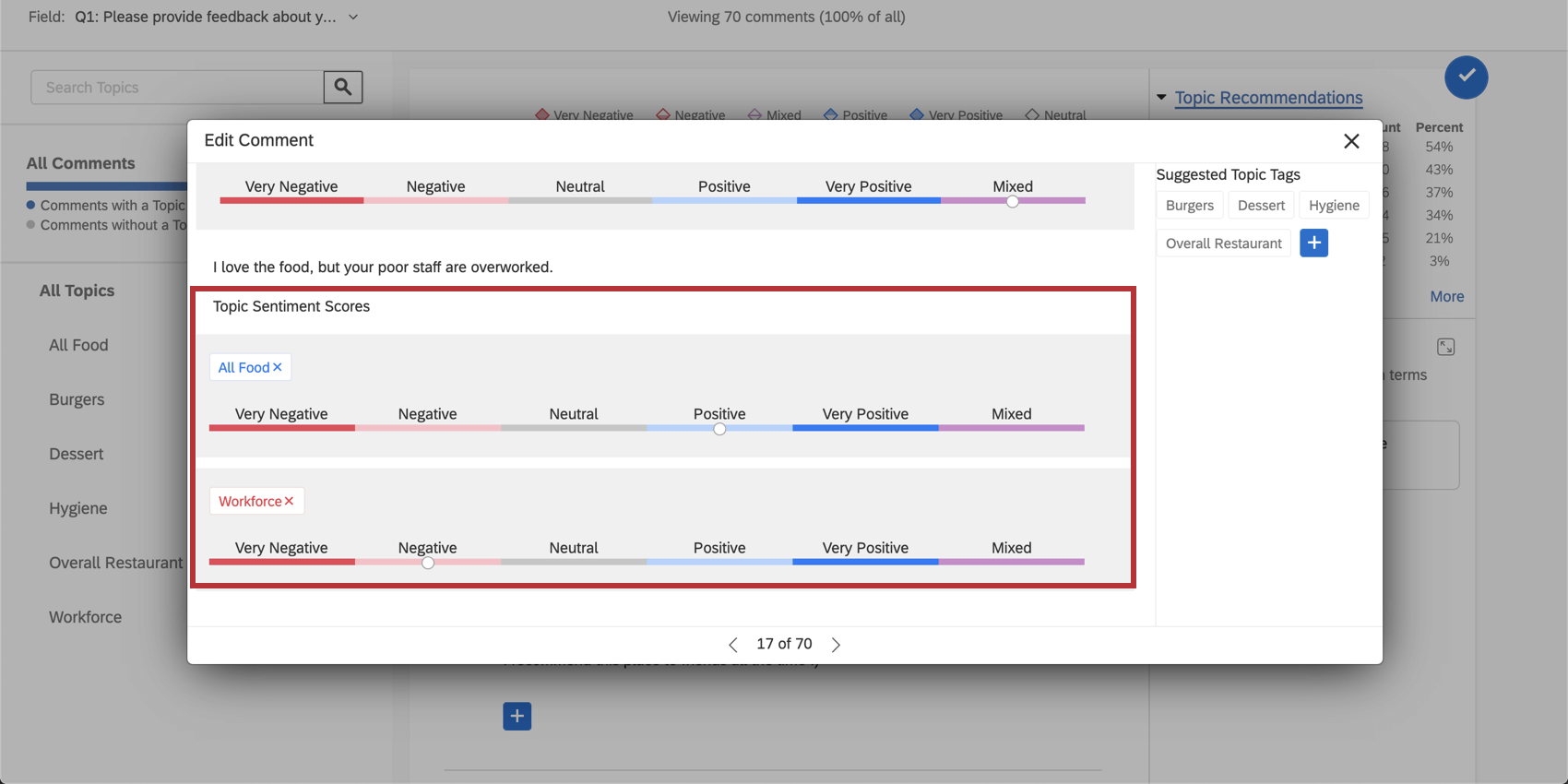 You will be able to select sentiment and sentiment score under each topic name.

In the above screenshot, the respondent loves the food at the restaurant but believes that the staff is overworked, so we want to make sure the topic “All Food” has a positive sentiment, while the topic “Workforce” does not. The overall sentiment is mixed due to these two topic sentiments interacting with each other. 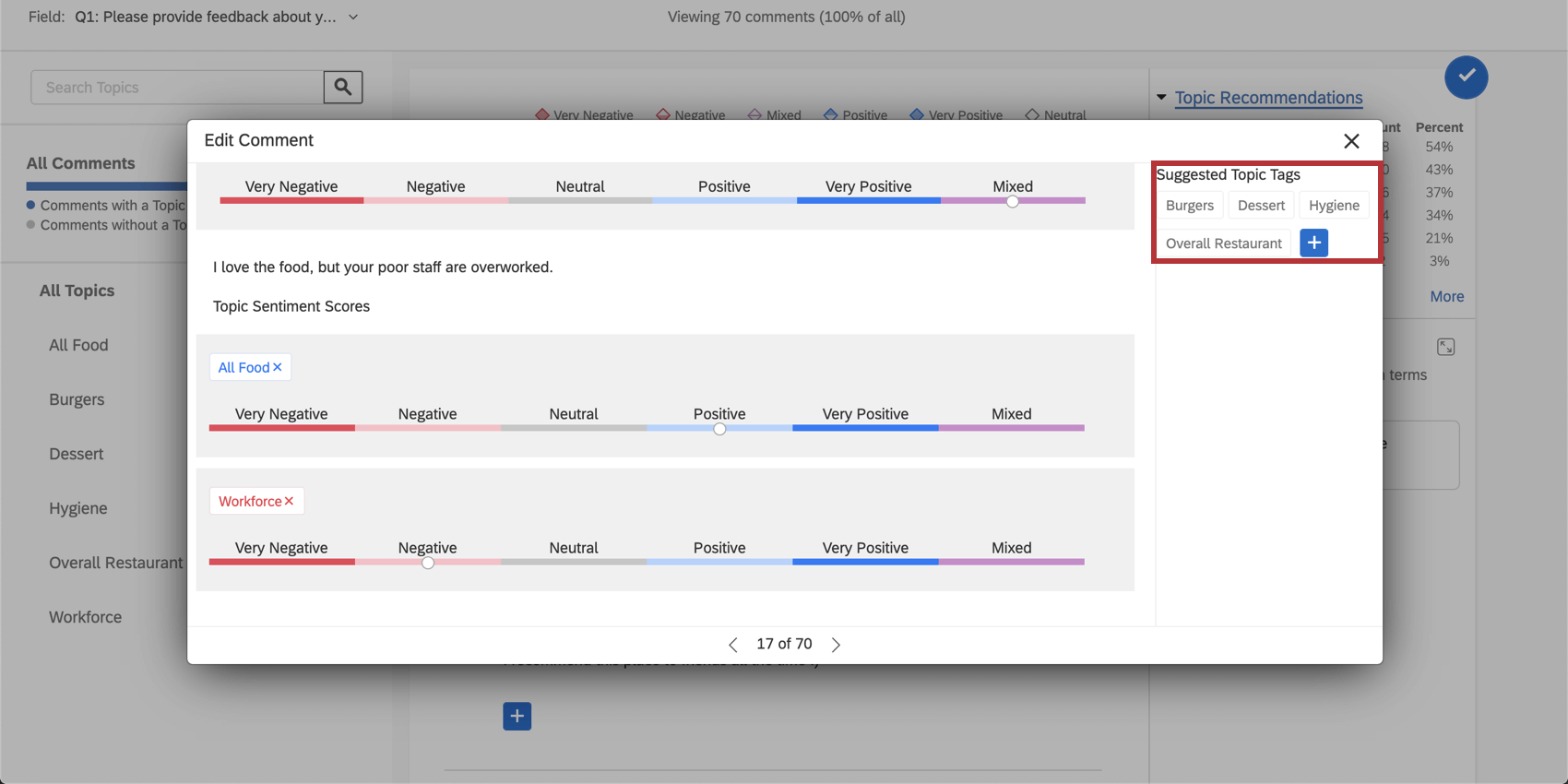 You also have the option to add additional topic tags and sentiments directly on the response by selecting suggested topics in the top right corner or by creating your own topic with the blue plus (+) sign.

In addition to labelling a comment positive, negative, mixed, or neutral, there will be a numeric value assigned to each sentiment.

The Sentiment Score is a -2 to +2 score for the sentiment of a comment. For example, a very intense, positive response such as “I love Love LOVE YOUR COMPANY!” would score a +2. An intensely negative response, such as, “I UTTERLY DESPISE your company!” would get a -2. 0 is a neutral score.

The Sentiment Polarity is a 0 to 10 score for the polarity of the comment. This is a calculation of how mixed the comment is. For extremely positive and negative sentiment scores (like the previous examples), there’s usually a corresponding 0 polarity. But for a comment such as “I love your food, but your restaurant is so dirty,” you will get a more nuanced score.

Attention: Once you have opted-in to the 5-sentiment model of Text iQ (very negative to very positive), you will no longer see the sentiment polarity functionality.

The sentiment score and polarity can be found with the sentiment itself under the Data & Analysis and in the Reports tabs. Like most text analysis variables, you will find them under the embedded data category. 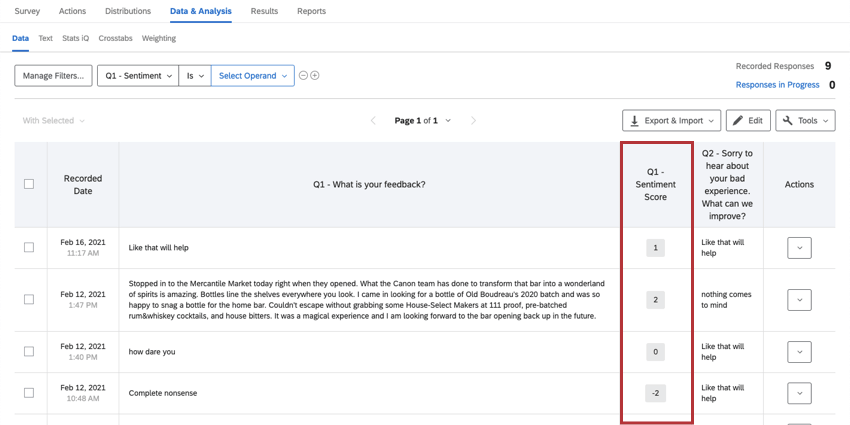 Qtip: Use Choose Columns to bring these variables into the Data & Analysis tab if you haven’t already! 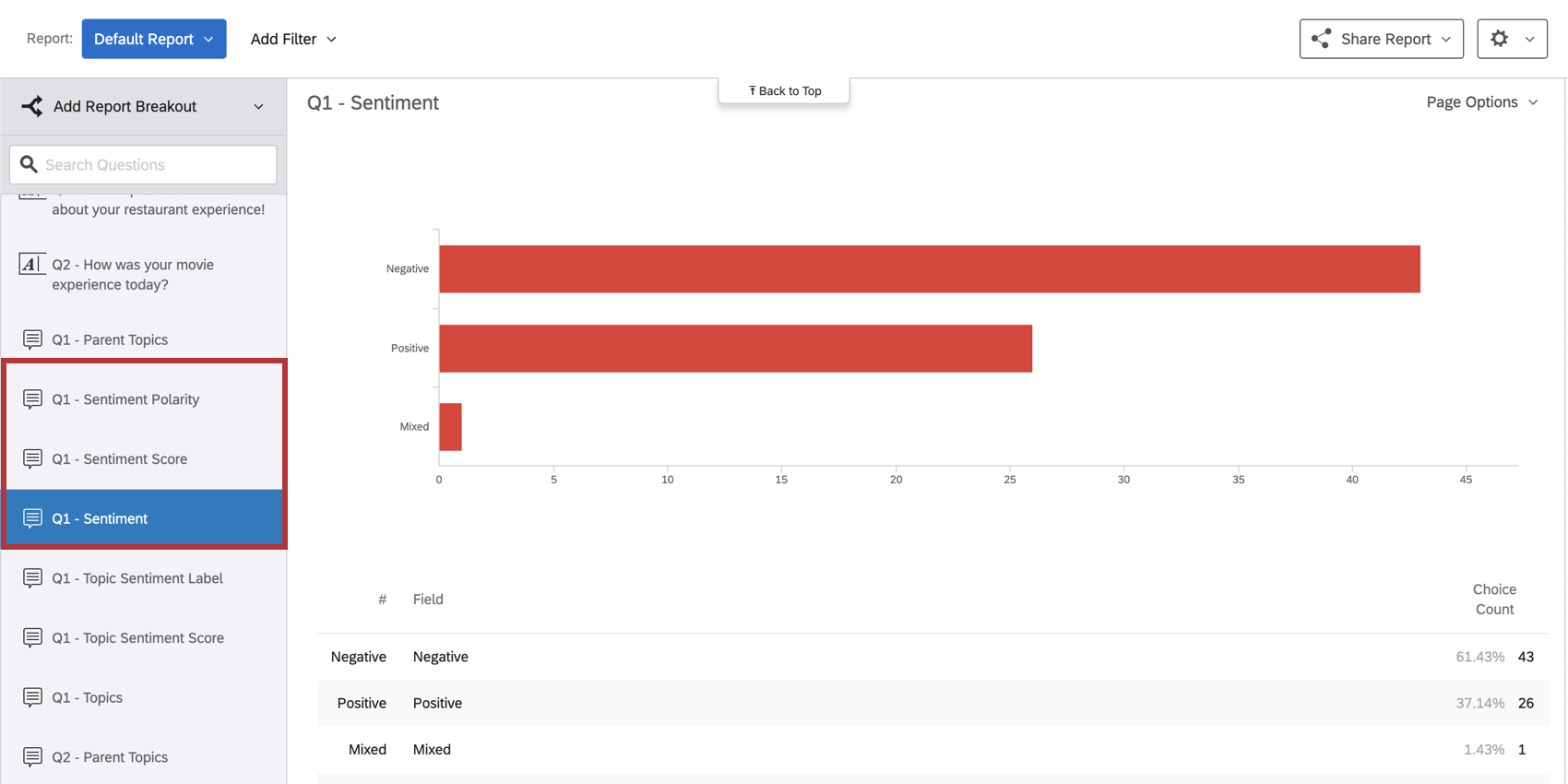 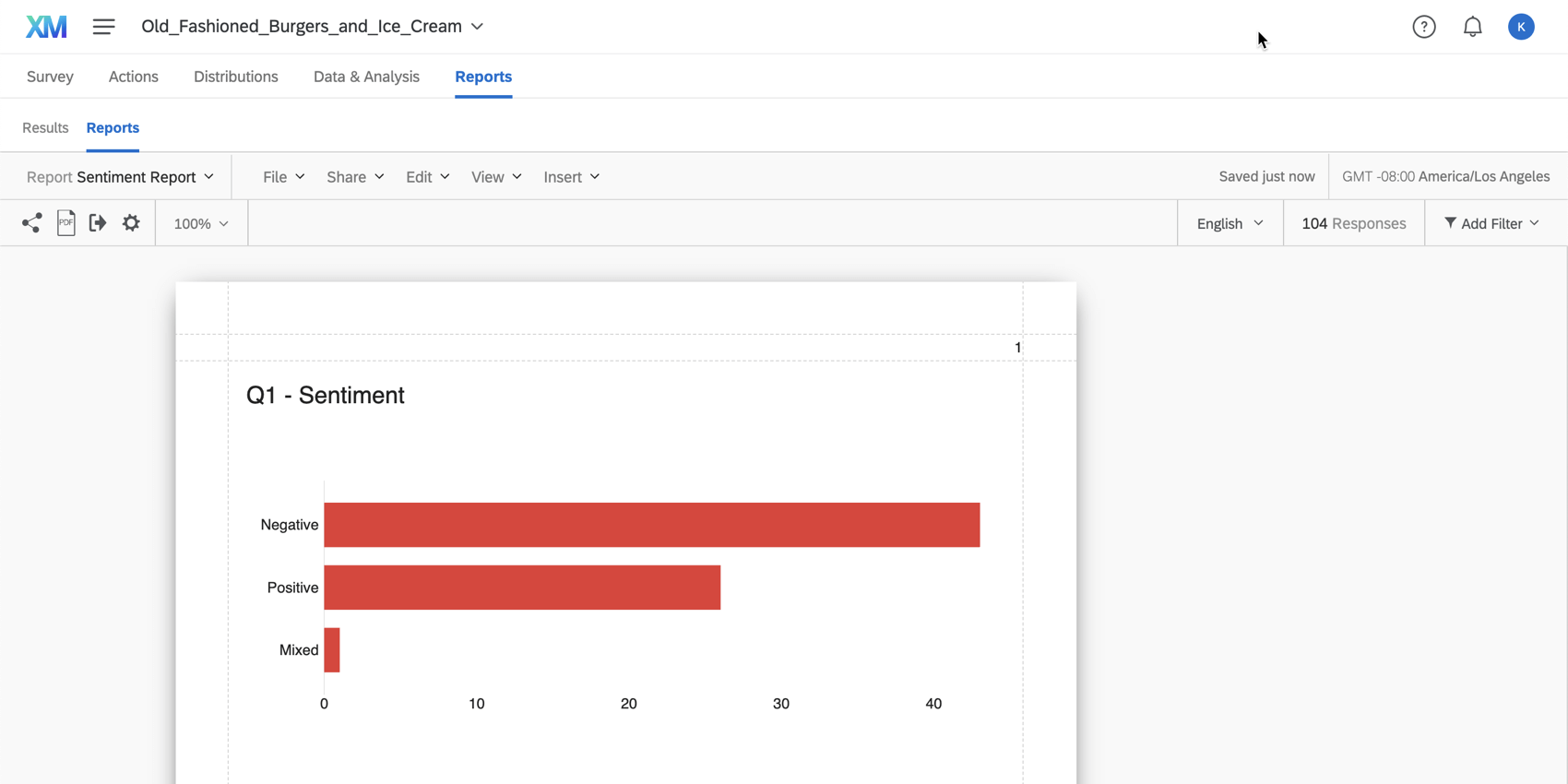 Analyzing sentiment in other languages is available to all users who have Sentiment Analysis, and thus all Advanced Text clients. 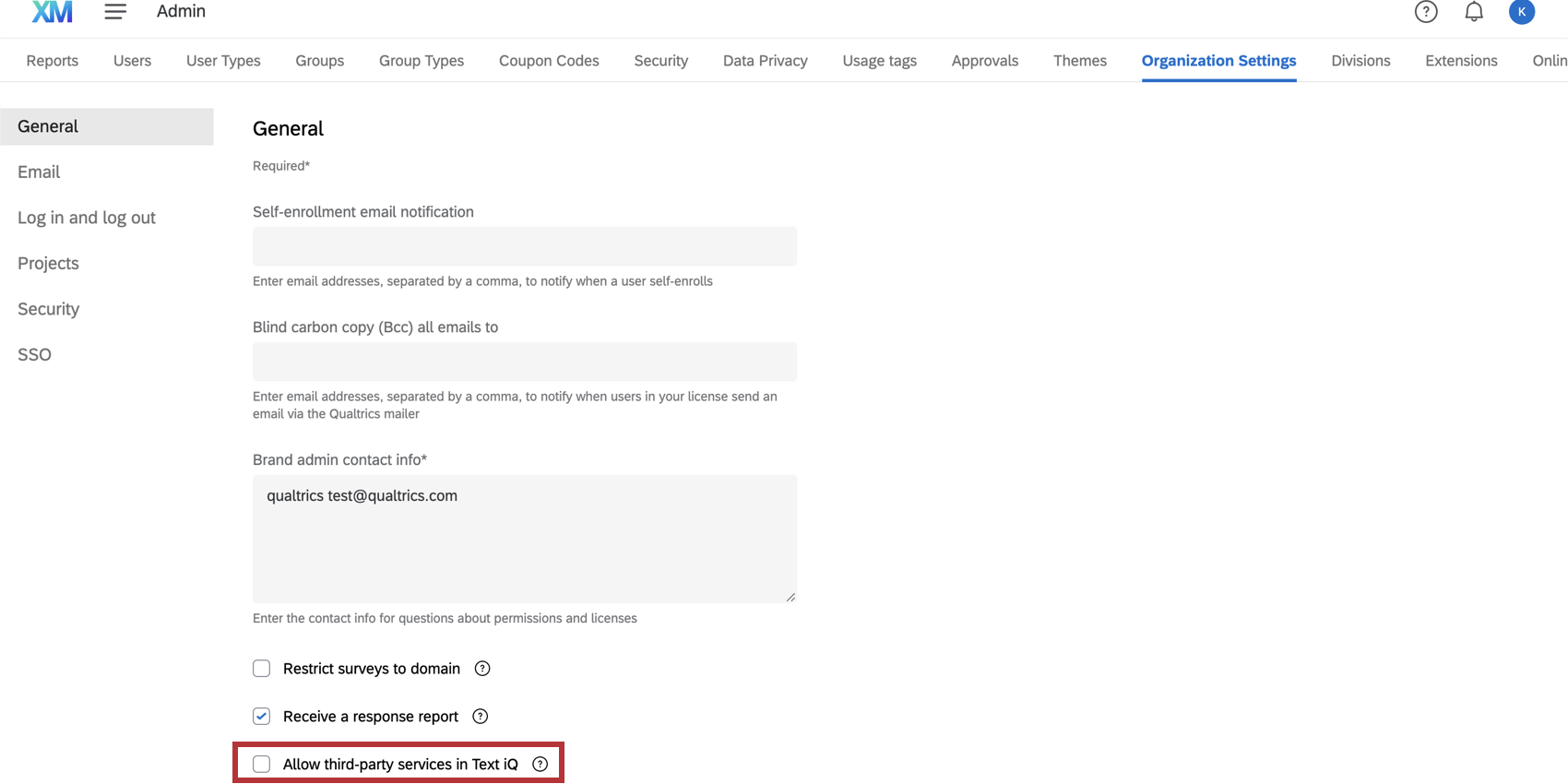 Qtip: Although this feature is available to all sentiment users, it is turned off by default. That is because we use Google software to perform sentiment analysis on these responses in their native languages. If you would like this feature enabled for you and are comfortable sharing your response data with a third party software, please contact your Brand Administrator and ask them to enable the Allow Third-Party iQ Analysis permission for the brand. Note that this is a brand-wide setting, so your administrator will likely decide based on what’s best for all users in the brand.