Math operations allow you to create custom values with each response. For example, you can create a function that calculates a formula using scoring for individual participants. Math operations can be performed in the survey flow, within a question, or choice text.

In this survey, the answers to two questions are summed, multiplied by 1.33, and saved as an embedded data field called Weighted Satisfaction.

Math operations performed in question or choice text are displayed to the respondent, but are not reported in the survey results. 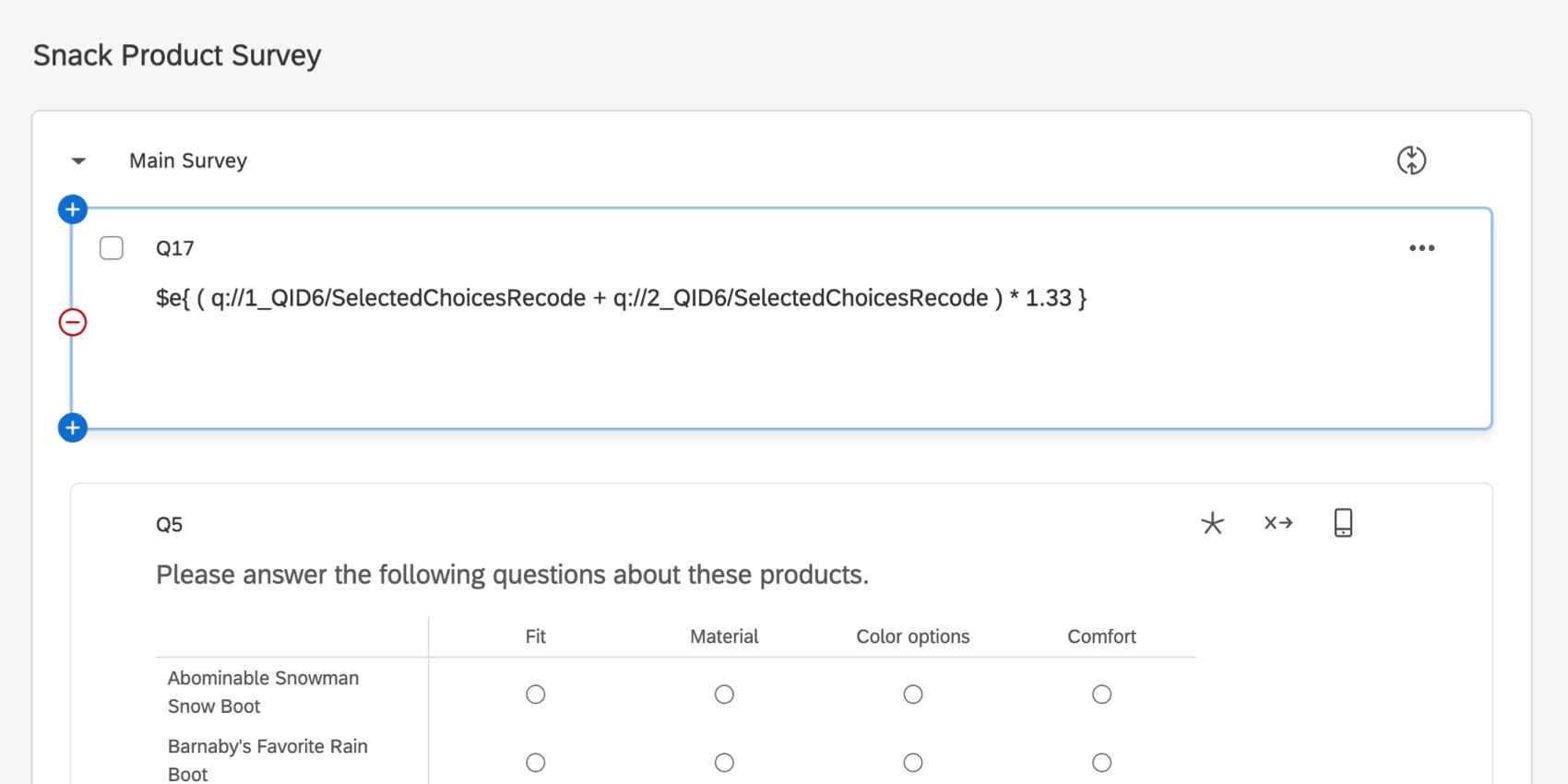 In this survey, the results of a math operation will be displayed as part of the text in a survey question.

All math operations are contained within the following syntax:

The math equation will be inserted between { and }. All items in the equation should be separated by a space.

If your survey is written in a right-to-left language such as Hebrew or Arabic, the syntax you use for math operations is a little different:

The math equation will be inserted between { and }. All items in the equation should be separated by a space.

Adding 4 + 4 is great, but more useful is the ability to perform math operations on answers provided in the survey. For example, one study may call for multiplying the answer to a satisfaction question by a fixed number. This is where piped text comes in.

Piped text is used to pull in a dynamic number for each respondent. For a review on how to generate the piped text code representing the number needed in your equation, refer to our piped text support page.

To use piped text in a math operation, remove the ${ and }. The resulting code would look like this:

Once placed in a math operation, the operation would look like this:

Qtip: For an easy way to perform simple addition, consider using the Scoring feature instead of math operations.

Parentheses may be added to specify order of operations. 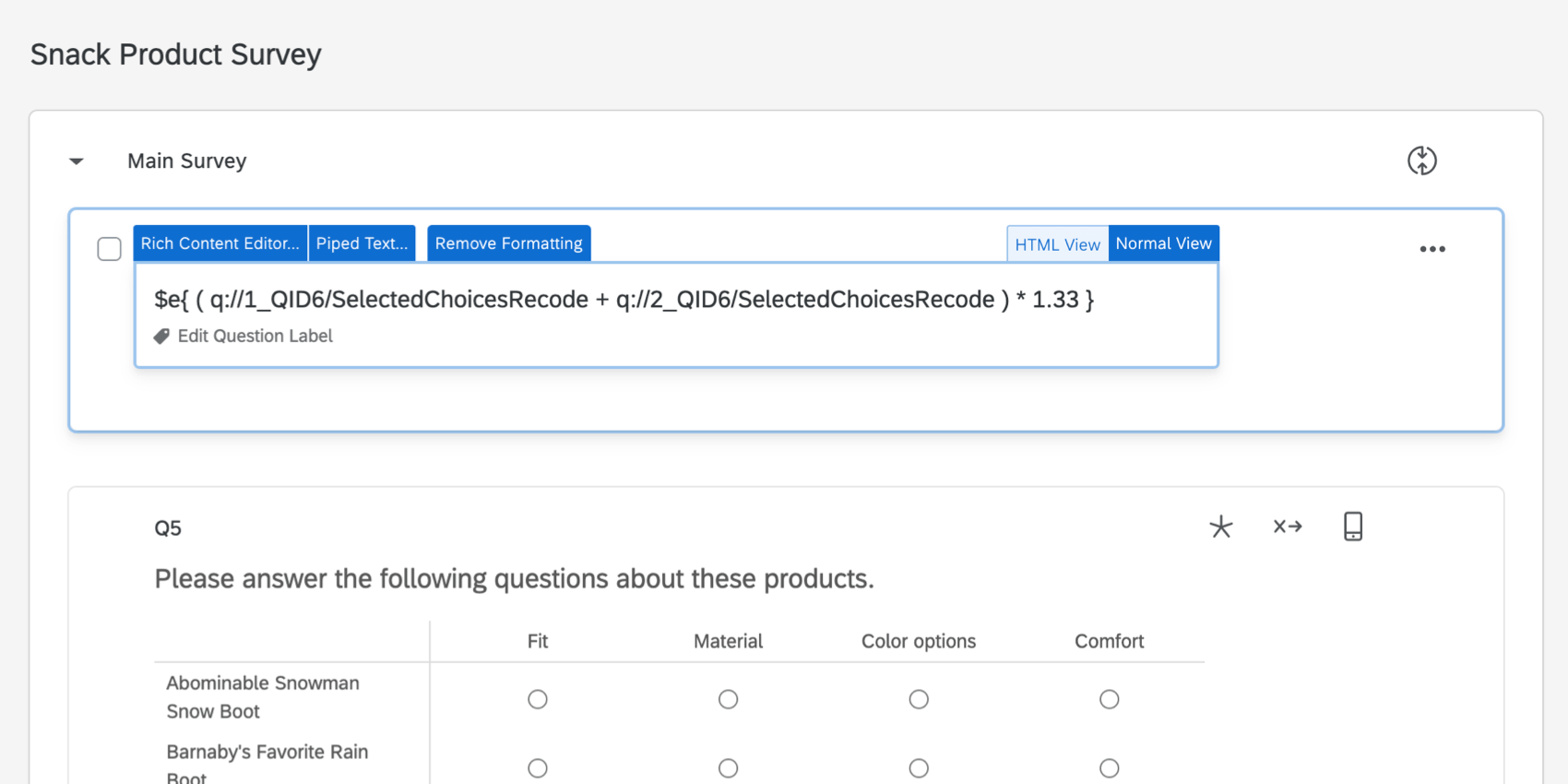 However, switching to the source view of the text editor, you will notice one of the spaces has been converted to HTML, displayed as “&nbsp;”. 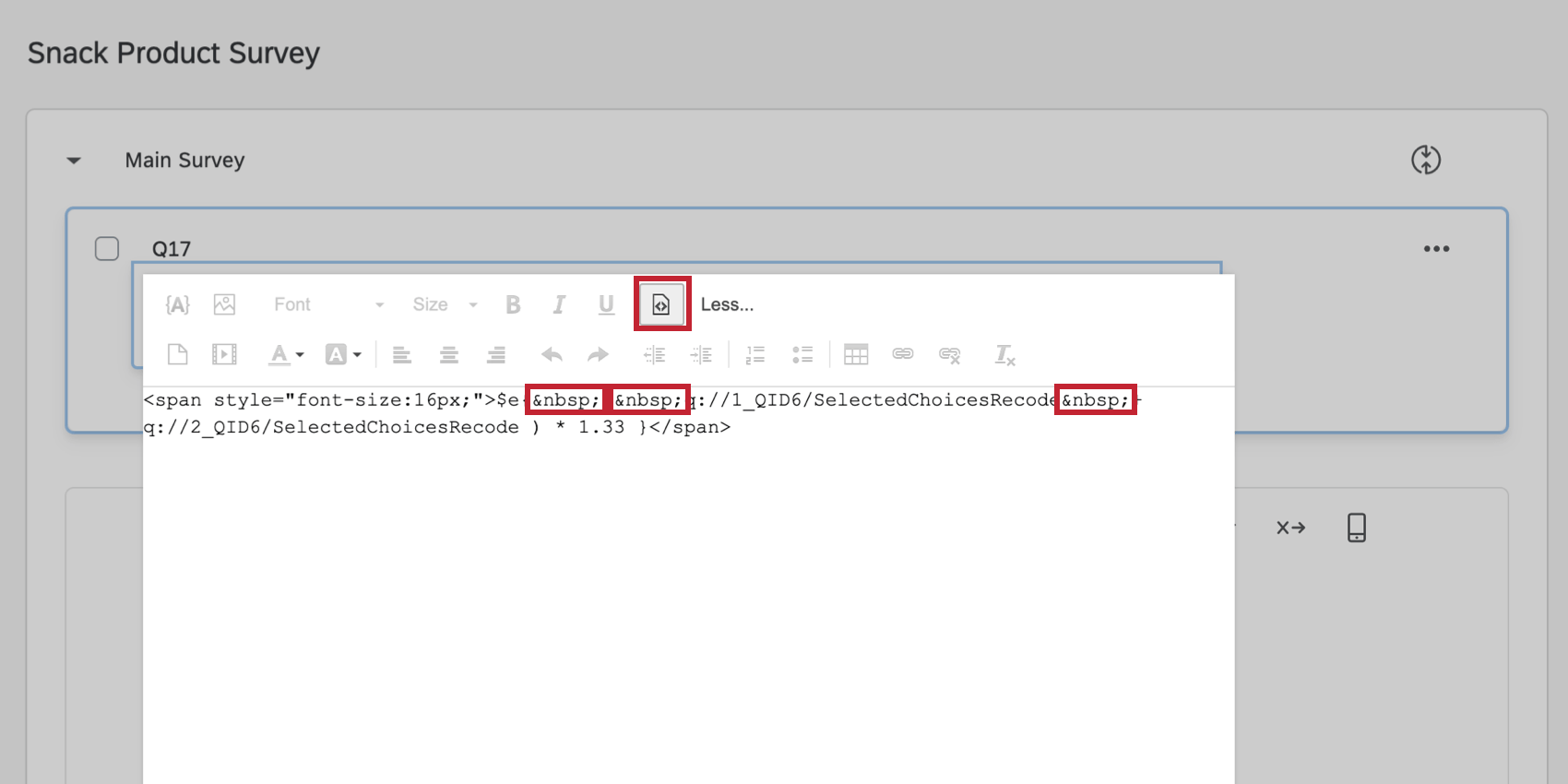 &nbsp; and other HTML tags invalidate a math equation. Remove these from the source view to fix the equation.

Remove $ and {  } from all equations to prevent failures when the piped text is empty.

See the Math Operations Syntax section above to ensure you are following all syntax rules in your math operations.

Incorrect Spacing in the Equation

Remember, every item in your math equation needs to be separated by a space. If you’re having trouble finding the spaces in your equation, follow the below steps:

Example: In this example, we pasted an equation into Microsoft Word and searched for the space character. We can see all of the spaces in the equation are highlighted in the document, and that this equation has correct spacing. 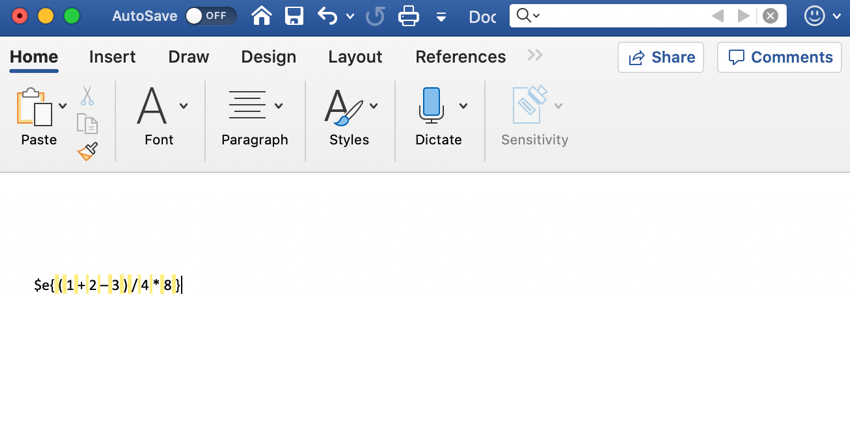 With piped text, you can customize question and answer choice wording for each respondent, allowing each of them to have a customized, dynamic, and personal survey experience. Piped text is a line of code you add to your survey that pulls information from different sources and displays that information to the respondent (or can be used in display logic, embedded data, and other areas).

It’s easier to ask your respondents for their height and weight than to ask them to guess their BMIs (Body Mass Indexes). But if you’re at the end of your data collection and realize you forgot to add a math operation for BMI to your embedded data, is there still a way Qualtrics can calculate this variable for you?

Creating and editing questions in a 360 survey works the same way as it does in the Survey Platform. The main difference is that there are fewer question types available for 360 surveys than there are for standard Qualtrics surveys. Visit the Question Types page for more information on the available question types.

Embedded data is any extra information you would like recorded in your survey data in addition to the question responses. It can be used to store information such as:

This page covers some of the most common tips and tricks that can improve your survey. Each one is easy to implement and can enormously help your study, depending on the format you're trying to achieve.